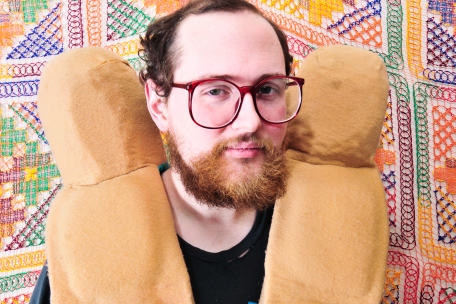 On September 12, Carpark will release Dan Deacon’s 2003 album Meetle Mice on vinyl for the first time.

Originally released as a CDR in 2003, the 17-track collection includes fan favourite ‘Drinking Out Of Cups’ (over 13 million views on YouTube, apparently). This 2xLP edition is pressed on blue and yellow vinyl, with deluxe b&w insert and digital download card.

Says Deacon: ”I was a very different musician back then trying to figure out how to interact with sound, what could be done with it, where it could go, learning music software for the first time, and discovering many more genres of experimental music than what i was exposed to in my youth on Long Island. It was an exciting time! Since then my aesthetic has shifted, my absurdist mindset subdued and I’ve been exposed to a global audience.

“At times I feel like these albums are skeletons in my musical closet, knowing how easily parts of them could be taken out of context by a media that loves to take things out of context. But these records were made without knowledge of that media world. There’s an innocent ignorance to them that none of my other records will ever be able to have, an ignorance lost to experience. These albums are like seeds. They sound, look and feel very different from the fruit that they’ve grown but they are still of the same tree. I hope you enjoy listening to them as much as I enjoyed making them. See you in the future.”