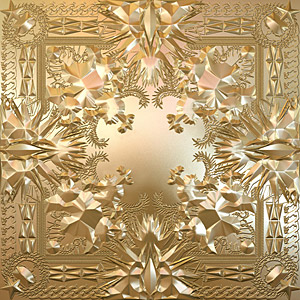 Watch the Throne, by definition, should not be an essential or vital album. It’s not just a celebration of excess, it is excess: a  project by two of rap’s biggest names made, on the surface at least, a) because it’s fun, and b) because they can. It’s the rap equivalent of Oceans Twelve – unnecessary and riddled with plot holes, but at times about as fun viewing as you can get, mostly because the fun that Clooney et al had making it (not to mention the money they spent) is so present in every scene.

Jay-Z has always excelled at portraying glamour with shaky foundations and a dangerous underbelly, most notably on the smoke-filled black and white rooms of Reasonable Doubt. On Watch the Throne however, the pictures he paints are content and secure, with Kanye spinning an infinitely more interesting web (his first verse of the album declares “when we die the money you can’t keep / but we probably spent it all ‘cause the pain ain’t cheap”). It’s actually Kanye who sounds more genuine throughout the album: while Jay-Z’s happily married, Kanye’s the tortured would-be auteur who seems to be permanently five minutes with a free bar away from a breakdown, and whose two classic albums still haven’t brought him happiness.

‘Lift Off’, featuring Beyonce is every bit the big budget first dance that you expect from an album like this, while the heavier ‘Niggas in Paris’ comes off less naturally: with its pitched down vocals and self-consciously hood beat, it actually sounds pretty try-hard. As the album progresses, the difference between Jay-Z and Kanye in 2011 becomes more obvious: whereas Jay’s content to spend Watch the Throne endlessly toasting the pair’s wealth, Kanye still sounds as conflicted as he did on last year’s My Beautiful Dark Twisted Fantasy (though at least one track from this album, ‘That’s my Bitch’, was an outtake from MBDTF). On ‘New Day’ he uses his son as a stick to beat his own past with, while on one of the album’s token dubstep beats, ‘Who Gon Stop Me’, he sounds far more hungry and eager to adapt to the backing than Jay.

Come ‘Murder to Excellence’, it’s clear that the pair are no longer on the same page, and what started as a back-slapping boys’ club of a record has actually developed into a more interesting dynamic (though Kanye’s conflicts are emphasised by the contrast with Jay-Z, who seems to get progressively lazier as the album goes on). Jay said recently that there were a lot of disagreements between the pair while recording the album, and listening to it, you can’t help but wonder if that’s because while Jay mostly uses this celebration as a chance to, well, celebrate, Kanye still has something to get off his chest.

Watch the Throne then: not essential nor vital, but for those still fascinated by MBDTF’s self-examination on a major scale, it seems that Kanye’s not yet out of ammunition. And yes, the pair of them do the big budget gloss-offs pretty well too, even if it seems like those are the only times that they’re both having fun.