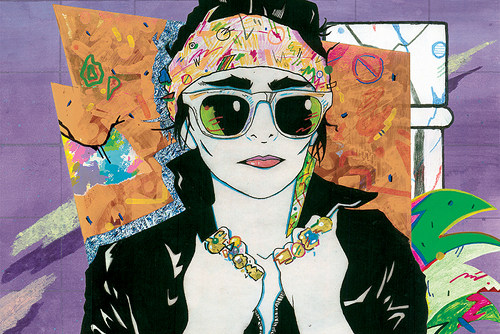 Amanda Brown records music as LA Vampires, and is one half of the team behind unstoppable West Coast label Not Not Fun.

Recently, Not Not Fun turned its hand to dance music with the creation of a new sub-label, 100% Silk. Silk releases dance music, but pays little attention to the issues that bog down a lot of modern club production – its records are frequently looking for that perfect moment before they are the perfect mixdown, drawing inspiration from the rough loops of classic New York and Chicago and the high drama of ’80s pop while celebrating individuality and idiosyncrasy.

Amanda picked Deee-Lite remix album Sampladelic Relics and Dancefloor Oddities as the subject of this feature, but before long the conversation had turned to ’90s pop, drugs, and inevitably, 100% Silk.

I’d never heard this record. It sounds crazy though, I read up on it a little bit.

“I love Deee-lite. I probably don’t need to tell you that I wish I was Lady Miss Kier.”

Is it as straight dance as the stuff I’ve read seems to suggest? I’m not familiar with all the artists involved in it, but there’s house and techno remixers there, drum’n’bass…

“It’s not that straight no. Some of it is house, some sort of acid-y, some techno yes. A lot of it has that NY ‘90s down-tempo dance vibe that means the world to me. It’s the music that I feel the most for…”

“Deee-Lite would be the ultimate coup for Silk. It’s funny, I used to be embarrassed as a teenager because I loved them so much, and the remixes especially.”

I always think it’s funny how the stuff you were embarrassed about loving as a teen inevitably comes back in your 20s, and you just realise it was great.

“Oh absolutely. At the time when I only listened to r’n’b all my friends loved Nirvana and thought I was ridiculous. I didn’t get rock.”

I tried so hard to get into Nirvana as a teen, because I was kind of in the same situation. I assumed not liking them was some sort of defect I had.

“Exactly, at a certain point, after everyone stopped caring about Madonna and Prince and Michael Jackson – so this is like 1990 – they switched immediately to Pearl Jam and Nirvana and Led Zeppelin. I was so not at that speed. They’d have had you committed for not liking Nirvana in ’94.”

How old were you then? It always seems like that period was a huge musical sea change in the US.

“I was in the eighth grade when Kurt died. It was like I couldn’t fight the r’n’b fight anymore, I couldn’t act like rock wasn’t the biggest thing in the world.

“I mean, it was very, very easy to shift to PJ Harvey and Sonic Youth and Bikini Kill. I wanted to be cool of course. But still, I never loved that music like I loved hip-hop and r’n’b, but I didn’t have the will to keep up with it.

“I remember getting into Tricky and Bjork and Deee-Lite, my friends were totally perplexed… mainly because I never did any drugs, didn’t know or understand rave culture, didn’t have anywhere to dance, and wasn’t old enough to anyway. I loved their drama though. I was sick of pretending to be bored.” 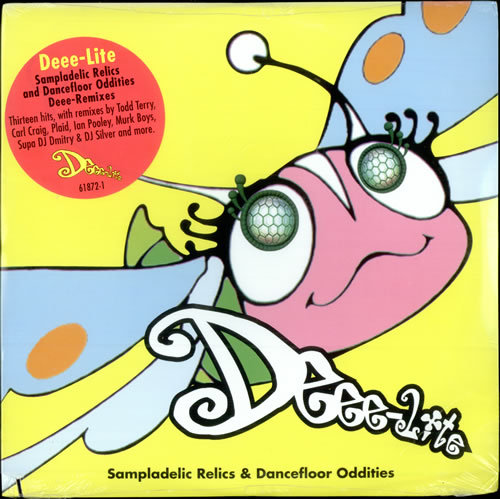 “Sometimes the highest you can be dancing, the happiest, is also sad because you’re putting all your hopes into it. It’s hopeful music, which in essence is sad, because we have to hope, and we have so much of it.”

For me, that naivety – and I mean that as a positive – comes through in what you’re doing with Silk. Like in the UK, people can be incredibly stuffy about dance music, way too much of it – at a critical level, anyway – is middle-aged white men comparing everything to jungle or hardcore. It can be easy to feel that if you don’t have that understanding or experience of rave culture, that you’ll never understand it. Whereas Silk seems much more about individual approaches to dance music, free from that sort of restrictive attitude.

“I once asked Britt [Brown, Amanda’s partner in Not Not Fun], if I’ve never done ecstasy or acid, can I really fully understand the point of dance music, can I really fully love it? He told me, no. He didn’t even stutter. But I do love it, I have real passion for it, sober as I am.”

“Yes, I get very carried away by dance music. I still think it elevates me, puts me in a trance, makes me feel a bit out of my body or head.”

Obviously at the heart of dance music is a primal urge to dance, be transported away in the groove, etc – but it’s also an innocent urge, and a really pure one. Everyone has that in them somewhere, regardless of what drugs they’ve done. Deee-Lite is hardly drug music.

“No, not at all really. It’s kind of like sparkling water music. Pellegrino dance.”

You know there’s a label in France called Sound Pellegrino.

“The French are so smart. Like when I heard St. Germain for the first time I flipped out. I was like ‘oh my God, these people know exactly what they’re doing!”

I love the sparkling water description. There’s a sparkle that seems to bind together a lot of the Silk releases – especially the recent ones.

“Yeah, and the next few to come too, I think. When I got the Octo Octa record, I cried listening to one track… It was so pure. I cried because it was so unbelievably good, but also because I get to put it out, and also because it’s sort of sad. I mean that’s what I want to do this for. Those feelings.”

There’s such a thin line between incredible happiness and sadness in a lot of classic house, I think.

“That’s exactly it. What I love about Ital’s music is it’s so beautiful and uplifting, and sad. It’s sad because he believes in it so much that he puts a little of his soul in it, and that’s what the best house/dance DJs and producers do.

“Sometimes the highest you can be dancing, the happiest, is also sad because you’re putting all your hopes into it. It’s hopeful music, which in essence is sad, because we have to hope, and we have so much of it. Is that going a bit far? I think about it a lot.

“It doesn’t hurt that we mostly relate the creation of dance music to the saddest decade, especially for those who loved to dance. Dance music is total Gatsby, it’s like crying in your confetti. The sad celebrator. Classic archetype.”