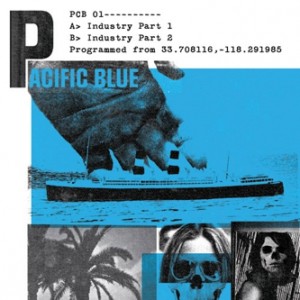 A quick check doesn’t turn up the provenance of the quote that’s buzzing round my head while listening to this, the first release on new label Pacific Blue; an oft-repeated, in different forms, variant of “all a club needs is a big fuck-off sound system, black walls and a flashing red light”. It may have been Weatherall, it may have been Tiesto, it may be apocryphal – but this record sums up exactly why dispensing with extraneous, unnecessary clutter can be the most vital and atavistic way of expressing what club music is about.

Coming from Shifted, a fast-rising UK techno artist whose releases on his own Avian and Luke Slater’s Mote Evolver have gained plaudits of late, Pacific Blue is apparently designed to focus purely on straight ahead floor music, shorn of the atmospherics and experimental edge that his previous records have rightly been lauded for. And “shorn” is the apposite word, as there is very little actually happening on either side of this 12″.

That’s not meant in a critical sense. The constituents of these tracks – percussion and a Berlin-evoking stab – are the same on both tracks. The rhythm has an insistent swing, which becomes more of a rigid charge on the second side, and the stab detonates, with reverb and delay variations, throughout (and again with a more insistent regularity on the flip – this version for the end of the night rather than the middle, perhaps).

The bass drops, woodblock and claps circle round with the timely predictability of planets in orbit and various other tiny adjustments take place. But rather than this being a by-the-numbers exercise in formula, it instead transcends mere workmanship by imbuing all of the above with an intangible, vital, energised, forward motion which is impossible to quantify. It’s precisely its reduction down to just the elements which make techno amazing in the hot dark at 3am that make this a standout – and why the genre, while needing to evolve and change with time, shouldn’t escape the primitive and vital bedrock of its origins.