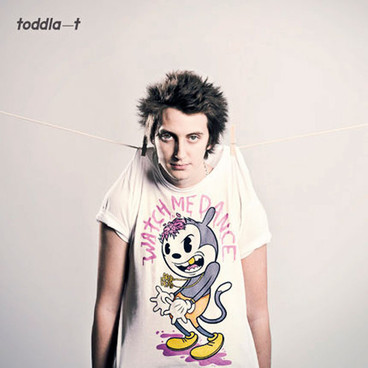 It’s a long way from Sheffield’s Park Hill to Jamaica, but these are two musical poles which Steel City rudeboy Toddla T somehow effortlessly swings between. Since he was in short pants, Toddla’s sonic science has always drawn on the bashier end of dancehall and hip hop while refusing to let go of his physical roots in South Yorks, which of course birthed the steely electronic pop of the Human League, Heaven 17 et al. Watch me Dance, his second long player and first for Ninja Tune, ricochets between these two disparate in style.

Toddla hasn’t sat still for a second since his 2009 debut Skanky Skanky – now a constantly gigging Radio 1 DJ, he’s set up his own Girl’s Music imprint and released countless remixes and productions for the likes of Jammer, Ms Dynamite, Major Lazer and Tinchy Stryder. His behaviour suggests, much like the constant flitting between myriad musical styles on Watch Me Dance and the tour film which accompanies the album’s release, that he just can’t stop moving.

The record’s launch hasn’t been without it’s problems – digitally rush-released earlier in the month due to a leak, more than 100,000 physical copies were lost to the flames which destroyed Sony’s warehouse in the London riots. The music presents a rather more rose-tinted, nostalgic vision of UK street life than the one discerned in all this recent unrest.

So when the doors to the ‘Boom Deejay from the Steel City’s’ second record are finally flung open, what do you find? Perhaps unsurprisingly, Toddla has concocted a boisterous, speaker shaking party with an extra long guestlist of co-conspirators. Skream, Donaeo, Ms Dynamite and long-time Sheffield henchman Ross Orton are all inside, nailing shots while chinwagging with Roots Manuva, Roisin Murphy and Shola Ama. The music is as colourful and, at times, as ludicrous as the riding boots sported by Roots in the title tune’s video. He’s the first figure you’ll find at Toddla’s bar, wobbling his way all over their Zapp/Prince p-funk union – it’s one of the record’s highlights, the veteran MC sounding as sleazy as can be over a tune as perfectly pop as it is plain weird.

Other big moments come thick and fast in the first half – ‘Take Me Back’ is a love letter to pirate radio with Shola Ama’s soulful stylings taking you through a piano-house looking glass. ‘Cherry Picking’ sees Roisin Murphy wrapping her tonsils round an r’n’b bashment rhythm at once spiky and curvaceous; ‘Streets So Warm”s lyrics may be a little trite (“Mr Government, Mr Politicians, tell me why the streets are so warm”) but has undeniable bounce while ‘Badman Flu’ sees T teaming up with Serocee over a frenetic ragga breakbeat. Only in the second half does the pace dip with ‘Love Your Way’ and ‘Do It Your Way’ adhering to more obvious if still well-heeled pop styles.

A little bit older, maybe even a little bit wiser, Toddla’s Watch Me Dance is the sound of an artist maturing but refusing to grow up. Critics could argue he’s chosen to grab his love of all things bassy and low-end and wave them in the direction of day-time radio. But it’s so well put together and personable, and ultimately it refuses to sacrifice the power of idiosyncratic tune or off-kilter production at the altar of commercialism.