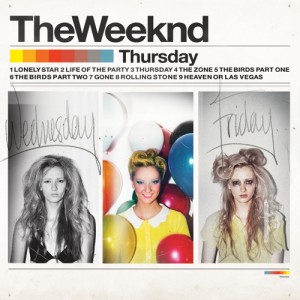 A lot of people will tell you that House of Balloons, the first mixtape by The Weeknd is already a classic. They’re right. Released early this year with minimal information (as most will know, pictures and the real name of The Weeknd have since emerged, as have the identity of the producers behind his distinctive sound), it took the black and white, morning after aesthetic of Drake’s Thank Me Later, and upped the sociopathic tendencies, the malevolence, the sadness and the songwriting values.

There’s been plenty of debate since as to whether The Weeknd is a genuine independent success story or the result of careful work by a major label (the slew of suspiciously high-budget “unofficial” videos, as well as the swift Drake backing and the slightly-too-perfect pictures that have emerged of him seem to suggest the latter), but the one thing that remains in all this is that House of Balloons was never going to be easy. Topping it was probably always impossible.

Despite this, Thursday, The Weeknd’s second mixtape and part of a series of three set to conclude late this year, does a remarkable job of expanding on House of Balloons while staying significantly distinct from it. The first distinction between the two comes in the cover art. Both mixtapes feature girls and balloons on their front covers, but whereas House’s sleeve is black and white, sexy, and the subject’s face is disguised, Thursday’s is creepy, in full colour, and its subject faces the camera on three different days: on Wednesday she’s apprehensive, on Thursday she looks devilish (not to mention high as a kite), and on Friday she’s crying.

This is significant for several reasons. In terms of its aesthetic, Thursday is far more colourful than House of Balloons: the bass drums in ‘Gone’ are overdriven compared to the washed out ones that featured on ‘The Party & The After Party’, and whereas House of Balloons included a lot of melodies that either could feature on, or were sampled from modern indie records (such as Beach House, sampled at least thrice on that mixtape), Thursday goes heavy on the distorted guitar, feedback, tape delay and on two tracks, as surprising as this might sound, haunting ska rhythms. There’s samples of blunts being lit, girls crying and cacophonies of screeching birds. Overall, it’s a more vivid, but more obviously dark picture than that of House of Balloons.

The face on House of Balloons’ sleeve was disguised, and this was appropriate: it was a record about stolen moments; captured stills of intimacy in the midst of numbed, smoked-out after parties. At times it was sad, at times it was regretful, at times it was predatory, but ultimately it was inconclusive. Well, on Thursday’s sleeve you’re forced to face its subject full on, and when you listen to the record you’re forced to do the same with The Weeknd. On ‘Life of the Party’ he’s cajoling a girl into group sex (“I got two little ladies / got one little room / there’s a room full of niggas / baby what you wanna do? … you gonna please my boys”), while on ‘The Zone’ he’s “making love to [another girl] through you / so let me keep my eyes closed”. There are minimal moments where he shows regret; even on ‘The Birds Pt. 2’, which centres around a girl crying, wounded on his floor, it only ever deals with her perspective.

Speaking of predatory, that’s another big change between House of Balloons and Thursday. On the Weeknd’s first mixtape, he found himself caught up in (though, granted, embracing) drug-fuelled situations; encounters with girls that “seem to have 20 different pills in ‘em”, or “bring the drugs”, while he brings his pain. Yes, there’s also moments where he’s supplying (“don’t be shy with it / I’ll supply with it”), but on Thursday it’s always The Weeknd calling the shots, and him initiating these situations. It’s no longer an even playing field: these songs’ subjects feel like victims.

One of Thursday’s most telling lines though, comes on its penultimate track ‘Rolling Stone’, when The Weeknd sneers “yeah I know I got my issues, why you think I fucking flow? / and I’mma keep on smoking ‘til I can’t hit another note”. Intentionally or not, it’s a flip of a line from House of Balloons’s penultimate track, ‘Loft Music’, when he sings “baby I don’t play / unless it’s keys, then I play all day”, with that track’s glamour turned to despair and reliance (the track continues: “baby I got you / until you’re used to my face / and my mystery fades”). Thursday is sound of the Weeknd showing his face; stepping out of the mist-filled, Polaroid-shot rooms of House of Balloons. The results aren’t pretty, but they’re every bit as compelling – if less immediately appealing – than its predecessor.