Mika Vainio: Life (…It Eats You Up) 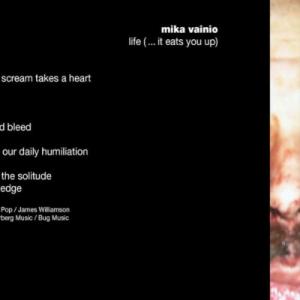 In his 17-odd year career, Mika Vainio, both under his own name and a blizzard of pseudonyms – and perhaps best known for his role in Pan Sonic – has covered a great deal of ground; from the brutal rhythms of Pan Sonic to the techno pulse of 0, Kentolevi and Tekonivel, or the sparse dronework often released under his own name. There’s always, however, been a common aesthetic across these disparate releases. Explicitly on his work as Philus, which took influence from hospital machinery, but implicit in almost everything else he’s worked on, there’s been a sparse austerity to his sound. Even when distortion is present, as it so often is on the early Pan Sonic releases, the distortion is used as much for tone as heaviness, and there’s still a clean preciseness to its use.

So a first listen through to this, his (by my reckoning – hard in a discography this large and sometimes obscure) eighth solo release, is a pretty big shock. The press release refers to this being the first time the guitar has been used as a “primary sound source”, but rather than an Oren Ambarchi or Keith Fullerton Whitman style examination of the nuances of tone, the album is dominated by the distorted, feedback drenched sound of ’70s punk, ’80s post-punk and ’00s drone metal. This extends as far as a cover of The Stooges ‘Open Up and Bleed’, which incongruously enough is the closest in sound to some of Vainio’s previous work (with an echo in the ponderous doomy bassline of his cover as 0 for Pink Floyd’s ‘Set The Controls For The Heart of the Sun’).

This is apparently a deeply personal album for Vainio, and it’s hard not to wonder at what tumultuous personal circumstances have wrought this change in aesthetic. For sure however, there is still a devoted attention to detail evident across the tracks – this is less loose-limbed live performance with spontaneous feddbacking, and more calculated precision use of assembled material – and the blast beats that appear throughout hark straight back to Pan Sonic’s glory days.

There are some amazing pieces of music here: the aforementioned Stooges cover for one, which degenerates into overdriven bass drones at the end, ‘Mining’, which circles round a huge industrial drum pattern; ‘Crashed’ and ‘Conquering the Solitude’ both use the razor sharp treble of high overdriven guitar lines stretched into drones to carve out huge swathes of notes and harmonics. Two tracks are absolute stand-outs though: ‘And Give Us Our Daily Humiliation’ uses “traditional” sounding kit drums, against bass pulses and punishing stabs of metal, with treble hisses that cut throughthe occasional complete silences, all the time promising the release of a riff or rhythm but never delivering, a sparse stripped down skeleton of a metal record which finally gives way to an at-first hesitant then full throated brief noise coda. Album closer ‘A Ravenous Edge’ by contrast is a huge, epic finale, perhaps intended as a summation of the preceding tracks, using cavernous echo to build skeletal percussion into a droning distorted riff, slow and pendulous. Lines add on top of the riff along with feedback to build into awe-inspiring doom, before adding atonality and then dropping away into scrapes and echoes.

Contrary to expectation it’s the more abstract tracks on this album that are harder to engage with. Three short (three minutes or less) tracks are interspersed throughout the album’s duration, and in tandem with opener ‘In Silence A Scream Takes A Heart’ these focus less on the tonality and rhythm and more on the high, dissonant feedback and clashing harmonies. Perhaps because of the emotional resonance of the other tracks, coupled with the personal background of the album as a whole, these feel less “human” and therefore less raw and harder to emotionally empathise with. The net result is that whilst Vainio’s abstractions before, while difficult, have always been worth the investment, here partly thanks to the company they keep they just come across as hard to listen to due to the high frequencies and clashed notes.

Life is obviously a highly personal statement though, and as such was always going to provide areas more accessible than others. The whole, while genuinely hard to listen to in places, provides a timely and salient reminder that experimental music, whilst often perceived as being cold and emotionless, can be at its very best when wearing its heart on its sleeve.