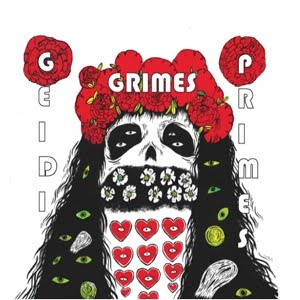 Available on: No Pain in Pop, reissued LP

Catching Grimes live on her recent UK tour with How To Dress Well was an interesting experience. Whether or not the night I caught her was an accurate representation of her live shows in general remains to be seen, but on the occasion in question there was something endearingly amateurish about Claire Boucher’s performance. Marred by technical difficulties she seemed to lack confidence; abandoning songs midway though and repeatedly apologising to the audience. Fortunately, any loss of confidence was ultimately overshadowed by her haunting, unique voice and the strength of her songs. But it did serve as a reminder that, despite already clocking-up two full length releases and a split EP, the Canadian musician is still a relative newcomer, barely out of the “bedroom producer” stage of her fledgling career.

It’s from these early steps that Geidi Primes comes. The album first emerged a little over a year ago as a limited cassette and free download release, and now sees full release through No Pain In Pop. Listening now it’s easy to see how much Boucher’s songwriting and production technique has progressed in a relatively short space of time; compared to this year’s follow-up LP Halfaxa and Darkbloom – her split EP with fellow Canadian d’Eon – Geidi Primes sounds like a very rough-and-ready sketchbook version of Grimes’ current material. The tracks are short and minimal, her reverb-heavy vocals sound rawer and you can hear the limitations in her recording setup. Comparing any of Geidi Primes to, for example, Darkbloom standout ‘Vanessa’ it’s instantly obvious how much more confident her songwriting and production technique has now become – on the older material her use of samples is clumsier and more obvious, songs sometimes seem to lack structure or feel unfinished and Boucher often hides her vocals low in the mix under too much reverb.

Yet for all its limitations Geidi Primes still has a lot going for it. Even though much of the material doesn’t feel fully formed, the whole album is laced with good ideas and undeniable traces of Boucher’s talent. Tracks like ‘avi’ and ‘Feyd Rautha Dark Heart’ showcase her knack for writing captivating, repetitive vocal melodies, layering her voice into rudimentary choral vocal harmonies. Meanwhile, ‘Caladan’ and the excellently titled ‘Beast Infection’ are both early examples of Grimes’ skill at using delay effects and percussive loops to build surprisingly-infectious grooves out of relatively minimal ingredients.

Given its understandably lo-fi nature, Geidi Primes is the rawest, least focused and, as a result, least accessible thing in Grimes’ quickly-growing catalogue of releases. Yet Claire Boucher is already proving herself to be the sort of artist it’s worth at least checking out every release by. If you’re a newcomer to her music then this reissue is probably the wrong place to start, but it’s certainly worth getting around to eventually.