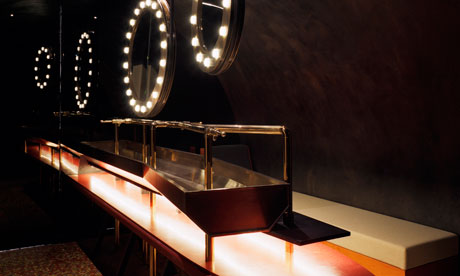 The Mulholland Drive director and, as of the last couple of years, musician, was not present at the club’s first night, but has spoken to L’Express’s Paolo Genone about his intentions for the club (as reported by The Guardian):

“I’m 65 years old”, points out Lynch. “They say that when men go into their 50s they dream of building gigantic towers to prove their virility. I have directed films, composed music, made all sorts of objects, works that had a beginning and an end. Now I want to make something solid.

“First, I started with painting. For the last three years I have been working in a lithographic studio in Montparnasse that Picasso and Miró used, drawing on the same stones where they painted. Then I started working on Silencio, which has taken the last two years. Looking at what we have done, I feel myself almost immortal.”

“I have the feeling that I have coaxed out some of the atmosphere and the characters from my films, and even from my music … Silencio is something dear to me. I wanted to create an intimate space where all the arts could come together. There won’t be a Warhol-like guru, but it will be open to celebrated artists of all disciplines to come here to programme or create what they want.”

The Guardian‘s piece features descriptions of Silencio’s various rooms and “golden tunnels”, as well as some pictures of the club’s interior. According to Arnaud Frisch, the club’s owner, Lynch will be “programming everything [in the club] next month”.

Silencio’s rates for membership are €780 a year for regular membership, €1,500 for premium and €420 for the under-30s and non-French residents.