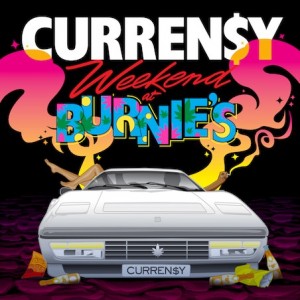 While most stoners have to contend with unwashed clothes, hideous novelty ash-trays and paranoid schizophrenia, rapper-cum-professional stoner Curren$y is a cut above. Roughly 30,000 feet above. His weed-world is a pristine sort of place, lit by blinding L.A. sunlight bouncing off Ferrari bumpers under a spotlessly blue sky, a sky which he’s more often than not flying through in a Lear jet. Most thirty year old stoners are depressing, biscuit-crumb showered figures, unlikely to move their feet off the carpet to let a resentfully-wielded hoover nozzle pass under them. Curren$y, on other hand, is an elevated icon of cool, and what’s more has earned this status at least partly through his tremendous work rate (this is one of at least six albums and mixtapes he’s released this year).

Not yer average stoner then, but for the uninitiated listener Curren$y might still seem a bit of an average rapper, his musically-documented mind as mono-maniacally dozy as any Tom, Dick or Harry(‘n’ Kumar). A native of New Orleans, he originally appeared on releases for Master P’s gangsta-rap label No Limit in the early noughties, but if he ever was a ”street life” rapper, he is now only really concerned with the ”Jet life”, a life which mainly involves flying from one luxurious five-star destination to the next while baked off your tits. The streets, and ”reality”, seem to have been more or less left behind, eating the proverbial dust as he speeds away. There is little apparent sense of discontent or righteous anger in his music – he seeks only a ”Reefer-lution”. Look for an “edge” in Curren$y’s music and you might be disappointed – it was rounded off by skunk smoke long ago.

Curren$y’s much (self-)emphasised obsession with weed might at times seem to be as much of a bid for an ultra-cool image as his mild fixation on brand names (”me and your girl just up on the set / Playin’ Black Ops, let her drive my Chevy-Box to the corner store / Rockin Adidas flip-flops, and some J-Crew Argyle socks…”), but a quick listen to Weekend At Burnie’s should convince you that it’s the real thing – true love. Romantic love, on the other hand, doesn’t get a look in: on ‘She Don’t Want A Man’ Curren$y describes a married woman he’s shagging who develops complicated feelings for him, thereby becoming a less-than perfect woman (the perfect type ”just wanna fuck”) in the heavily lidded eyes of a man who describes love in terms as unsentimental as “getting way too into the grip of the vagina lips / got homies searching for relationships.” Immaculately cool, he’s also immaculately cold (a blurry, emotively subdued beat envelops his rapping perfectly on this track), his laconic drawl coming across as wistful detachment; less palatable in this context than in its usual one of jet-setting luxury.

”She Don’t Want A Man’ sticks out as just about the only “topical” track on Weekend At Burnie’s: the closest Curren$y gets to darkness on a generally sun-drenched record where most tracks are about the same thing (nothing). The production, mostly handled by previous collaborator Monsta Beatz, is all gorgeous sweltering synth-haziness, (Dam-)funkiness emanating also from its thumping, snapping drums. Slightly muzak-y at times and not particularly interesting or ground-breaking, the production fits Curren$y like a well-fitted New Era. Cool as a cucumber, he rarely sounds excited on wax, and Weekend At Burnie’s is seldom an exciting experience, though it’s almost relentlessly pleasurable. Generally the album radiates a sense of relaxed euphoria (”Ahhh – this is the life!” goes the hook to one track) – the exact kind of cocooned, satisfactory and stimulating though unexciting pleasure that people seek in weed.

Anyway, it’s hardly as if Curren$y is Snoop Dogg mk2., just about able to spell his name out inbetween making words rhyme by ending all of them ”izzle”. Despite his thematic limitations, Curren$y is in possession of one of the tightest, most endearing and arresting flows in contemporary rap music, a flow which somehow sounds simultaneously lazy and intricately complex and knotted, confidently pushing and pulling, dragging and settling, on whatever type of beat he finds himself on. On ‘Televised’ that flow is slowed right down over a hazy, steady sweat-drip of a beat, while on faster, more rugged tracks like ‘One Life’, his rhymes are – for the attentive – mesmeric, packed with tumbling, subtly dizzying flows and vivid imagery (”the elitist of rhymers… you smell these trees leaking through your equalisers”).

”Don’t mistake my highness for blindness” he warns us on ‘Money Machine’, the other topical track on the album in which Curren$y talks about the pressure of maintaining a luxurious lifestyle, surrounded by ”sharks” and constantly aware of the coldness of “streets where your name no longer hot”. We should pay heed to this warning, and pay heed to everything else he raps, if we don’t want to miss the hidden depths that lie behind his unassuming, unflappable stoner persona. A hook as seemingly dopey as ‘Get Paid”s (”Get paid, my nigga, get – paiiiid”) sounds less an inane celebration of greed, more a mantra of righteous (politicised) determination to succeed in America, especially when following ”there’s niggas trying to make it through the night, let alone make a million / Get it on my nigga, and show off when you get it”. Either responding to, transcending or forgetting the American nightmare of inner-city poverty, Curren$y is, above all else, about making his American TV dreams come true: ”the bitches on your posters, really coming over”.