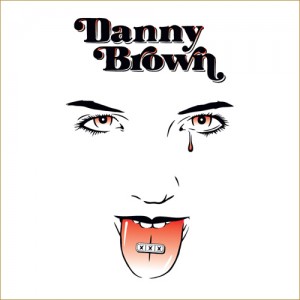 XXX is Detroit rapper Danny Brown’s follow-up to last year’s album The Hybrid. On the track ”Hybrid”, Brown memorably announced: “I’m not a Martian or human, I’m hybrid”. His completely distinctive rap-style certainly suggests a hybrid form, incorporating as it does a wide range of registers and dynamic tones (he can switch, to spasmodic and erratic effect, from squawking and yelling his words to calmly near-whispering them within a single verse), making him comparable to any number of disparate rappers (Pharoah Monch, Eminem, Elzhi) while remaining unmistakably different to all of them. His lyrical content, too, was “hybrid” on his first album. Most widely renowned for his close-to-the-bone (often very funny) punchlines, Danny also pulled no punches when it came to describing the bleak, poverty and drug stricken landscape of his native Motor City. His ability, or compulsion to cut straight to the nasty heart of an image or idea in order to craft shocking, amusing and larger-than-life punchlines proved a potent tool for vividly rendering the conditions of life itself as a punchline to a cruel joke. “Telling you I love you, your pops never did / Probably why there ain’t a pops round for none of your kids” he sympathetically but pragmatically observes, while addressing a woman he’s trying to get drunk on ‘Drinks on Me’.

While anything but lyrically conventional, The Hybrid was musically easier to pin down than its restless and hyperactive star; musically, it was more or less a collection of trad-hip-hop loops. Since that album, Brown has attracted much media attention through his decision to get his hair cut like Cassie to compliment his infamously skinny jeans (allegedly the reason he wasn’t signed to G-Unit), and XXX, appropriately, has been released via ultra-hip Brooklyn label Fool’s Gold, who have released past records by A-Trak, Sinden and Lil B. All this suggests that, whether for artistic reasons or for publicity (“Rest in peace, wack niggas, with oversized clothes / Mad at my jeans cos I’m stealing all they’re hoes”), Danny has fully embraced the weirdness that already marked him out on his more backpacker-ish first full-length.

So what does he rap about? Well, mostly himself, actually (he is a rapper, after all). But the overarching theme of XXX probably boils down to sex and drugs. There is copious consumption of both of the former, with Danny spending a lot of the album gleefully describing sexual and narcotic misadventures; fucking while “higher than Swizz Beats’s hairline”. The crescendoing of his party animal roar is perhaps found in the almost self-parodying aggression of ‘Blunt After Blunt’, which finds Danny obnoxiously yelling things like “Hold up! … Wait a minute! / Your pussy ain’t shit ’til you’ve had some Danny in it!” and “We about to make a movie / Starring me and a cab-full of groupies / And I do my own stunts”. Having told us earlier that he wants to ‘Die like a Rock-Star’, we might think that this simply amounts to a crotch-grabbing ego massage, were it not for Brown’s tongue-in-cheek delivery, and the qualifying signals that the rest of the album (particularly in its second half) gives us. Certainly, bling ‘n’ bitches rap is mercilessly skewered on ‘Lie4’ (”I’ve got that income tax swag!”), just as commercial radio rap is ribbed on ‘Radio Song’.

Danny is obviously gunning for a different type of rock stardom, the type which draws on and exposes inner turmoil, and on XXX he wears his drug-pumped heart on his sleeve. ‘Blunt After Blunt’ is something like the mid-point in an album which becomes, in its second half, almost a meditation on drug addiction – both its psychological cost and the damaging nature of a reality so grim that paying that price seems worth it in order to escape, if only temporarily. After the spaced-out musical and mental breakdown of ‘Outterspace’ and ‘Adderall Admiral’ come the plaintive horns of album stand-out ‘DNA’, over which Danny, in contemplative rather than celebratory mode, tells us that addiction is “in my D.N.A., cos my pops used to get fucked up the same way”. The hangover continues on ‘Nosebleeds’ and the beautifully understated, dimly-lit melancholy of ‘Party All The Time’, on which Danny shows us the flipside to all those misogyny orgies, sympathetically describing the fucked up lives of two party-mad (and maddened) girls, both driven by pain into seeking pleasures which ultimately amount to more pain (“Back of the class, blood running down her lips”), and to which they are, in any case, totally numb (“Fucking when the sun come up but don’t feel”).

Then we come to a slice of Detroit life, with both ‘EWNESW’ (“Living in the city where the weak get swallowed / Belly of the beast, we don’t care about tomorrow…”), and ‘Fields’ (“Where I live, it was house-house-fields, field-field-house, abandoned house-field-field”) depicting, with sober lucidity, a tattered urban landscape where unglamorous fucking takes place on “dirty” and “bug-ridden” couches, and where life itself is a trap: “We living in the streets where options is limited / Because there’s burnt buildings instead of jobs and businesses”. It’s at these points where XXX particularly hits home, depicting a reality far more XXX-rated than the coked-up sex of the album’s first half – though Brown makes clear that these vices don’t offer a real escape; they’re simply another trap. The subject of ‘Party All The Time’ is “Lost in the fog, head in the smoke / Laughing at the world, ‘cos her life is a joke”; for Danny Brown, comedy and brutality are mutually enabling and numbing bedfellows, trapped in a bad but necessary relationship.