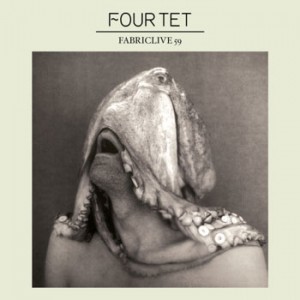 The plight of the mix CD. Yeah, yeah. You’ve probably read the argument dozens of times by now, because it’s usually mentioned in any kind of editorial surrounding the fast-fossilizing format.  I apologize for bringing it up again, but there’s a reason for that. All wide-eyed daydreaming aside, when the glut of free podcasts is overwhelming enough to begin with, why bother with a commercial product dogged by the limitations of copyright, licensing, duration, and everything else that comes with store shelves?  Some artists – notably in this very Fabric / Fabriclive series – have sidestepped the relevancy issue by making mixes exclusively from their own material or other such “artistic” moves, and have come up with near-masterpieces in the process. Four Tet, faced with the familiar dilemma, instead chooses to step out of the arena entirely.

London producer/DJ Four Tet probably isn’t the kind of guy you think of as “big name club DJ” and even though he probably deserves the tag more than you think, it stands that his Fabriclive isn’t your typical “big name club mix” either. I’ve always found Kieran Hebden’s DJing less than inspiring, even if his formidably crate-digging selections could be interesting, but I’ll admit that his concept for the vaunted London club’s series is pretty goddamn ambitious. You have to admire the guy, really. Instead of a mix representing the kind of set one might play at Fabric (as we can assume most of these CDs are meant to be), he wanted to capture the sound of the club itself. That means we get field recordings of the club embedded into the very music; a multi-room club, in fact, so we also get periods of silence meant to emulate the legions of punters wandering from room to room searching for the right sound to match whatever mood they’re in that night. He even pressed the new tracks he’s debuting here to vinyl just for the purposes of the mix, and digital post-production apparently involved zero cleaning up of the vinyl recordings.

In fact, you can kind of hear it: even with its shifting styles and jarring halts, Fabriclive.59 sounds consistent, for better or for worse.  Recording a set of tracks that spans decades from the same source material means it all feels remarkably cohesive, but the mix is strangely grey and overcast, a melancholia that coats much of the producer’s own work. Though he’s been moving more and more towards the dancefloor, his own rhythms have been more appropriate to induce pleasant hypnosis than dancing (‘Love Cry’), and this set ambles at the same relaxed and measured pace. So what kind of stuff does Four Tet DJ? You could say that here he focuses on the early(-ish) 2000s, unearthing lost classics like Apple’s incredible Funky relic ‘Mr. Bean’ or caning not-so-lost gems like grime prototype ‘Pulse X’, but he also manages to throw Floating Points, Burial and STL in there. Oh, and Ricardo Villalobos; you get the picture. It’s a mix that on one hand feels refreshingly devoid of chronology, an alternate universe vision of what might have happened if something else sprouted out of garage instead of dubstep, but there’s no real clear signifier uniting these tracks other than “inoffensive” or “polite.”

The actual mixing is exceedingly careful and not at all flashy, though it at least lacks the awkward flubs that sometimes mars Four Tet’s actual DJ sets. While those sudden stops and field recordings are an endearing part of the whole conceptual shebang here, I mean it when I say they’re sudden – songs unapologetically disappear mid-bar with no warning, more annoying than inspiring. As for the field recordings, they’re the kind of thing that’s worthwhile the first time around and just gets to be a skip-button-inducing drag the more you listen. At any rate, there’s a lot to digest here, including two fantastic new tracks from Hebden himself. ‘Pyramid’ might be the best Four Tet track yet, winding a multisyllabic vocal phrase around an uncharacteristically chunky, propulsive beat that itself unravels into a typically gorgeous chime section, while ‘Locked’ closes out the mix in more typical fashion, mixing pitter-patter percussion with a mournful guitar sample that brings things down slowly. If we’re going to go with this whole “club journey” concept, it’s an ending that implies someone falling asleep on the sticky, spent dancefloor at 8am than actually leaving the club, but it’s a nice enough ending that we can forgive the incongruity.  So while he might have tried his darndest to save the mix CD – or at least his own mix CD – Fabriclive 59 is not a complete success. It carries all the momentum and flow problems you might have expected from a Four Tet mix CD, ironically exacerbated by the DJ’s own artistic choices, but like I said, you’ve got to admire the guy. At the very least, I’ll keep coming back for ‘Pyramid’, and the ride to get there, like most of the Four Tet catalogue, is agreeable enough.