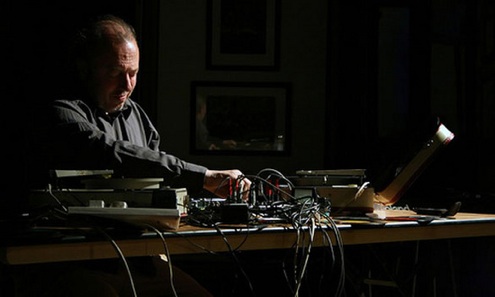 Jonny Mugwump’s Exotic Pylon night returns to The Vortex in Dalston, East London this Friday, 16 September, with a line-up to die for.

Headlining is Philip Jeck (pictured), the turntable manipulator whose seance-like live performances are never less than breathtaking, much like his acclaimed albums for Touch. Any opportunity to catch him play, especially in environs as intimate as The Vortex’s, should be snatched at.

We’re intrigued to hear that Bruce Gilbert will be reviving his DJ Beekeeper guise for the night. Gilbert was of course founder member and guitarist in Wire, but his solo electronic work has recently earned the widespread acclaim long due to it thanks to reissues from Vienna’s Editions Mego. DJ Beekeeper –  who has “a slightly different approach to the art of the disc jockey whereby other people’s music is selected blindly and manipulated live” – appeared at various techno raves in the 1990s but has lain dormant for some time now. Gilbert sometimes used to DJ from inside a shed suspended over the dancefloor, or so we’re told. Not sure if the shed’s coming out for this Friday’s gig but either way you want to be there, trust us.

Also on the bill: Ship Canal, Time Attendant and Kemper Norton. For more information on all acts involved, and to buy tickets, click here.