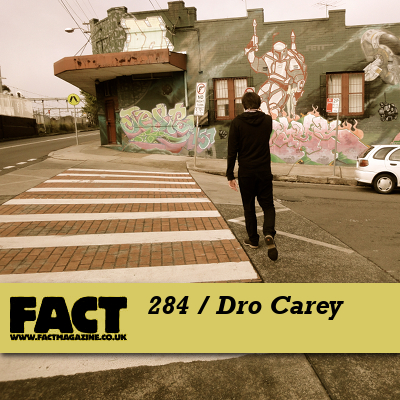 FACT mix 284 is a marathon session by Sydney artist Dro Carey, subtitled The 1AM Emergency.

We’ve been fans of Dro since late last year when we discovered his Brain So Soft Tumblr, an outlet for his completely out there takes on hip-hop, footwork and house. There’s no one around that really sounds like Dro Carey: his music’s clearly that of the night, often cracked out and deliriously sleep-deprived, but there’s also a twilight romanticism to it that keeps you coming back. The scratchy YouTube sampling helps, but Carey’s way more unique and experimental than your average hypnagogic bro, with singles already arriving on labels like Will Bankhead’s Trilogy Tapes, Australia’s Templar Sound and Ikonika & Optimum’s Hum & Buzz.

The last of those three, ‘Candy Red’ / ‘Hungry Horse’, is perhaps Dro’s best work yet, a blood red amalgamation of Timbaland, DJ Nate, Ariel Pink and more that’s so musically deranged and structurally unstable that it feels like it could fall apart at any moment. It came out last week, and even though Dro already contributed a short mix to FACT as part of January’s Producers to Watch in 2011 feature, it prompted us to push him for a second one.

The 1AM Emergency, which Dro also describes as “your brain at night”, is an hour and 41 minutes long, and features everything from The Haxan Cloak and Bruce Gilbert to Main Attrakionz collaborator Nem270, Raekwon and Outkast. Stay with this for the long haul; you’ll be a better person for it.