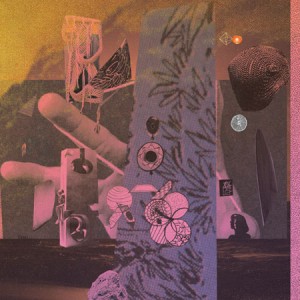 Available on: No Pain in Pop LP

By now, Patten is already being described as enigmatic. Combine this with his music – the DSP coldness of timbral choices, use of smothering compression, complex textural layers and a brevity of material – and you have a ready-made set of comparisons to Actress.

However, much of his debut album GLAQJO XAACSSO could be compared to the Warp catalogue; the acousmatic elements of Ha Ha Sound-era Broadcast, the heavy processing of Autechre’s Chiastic Slide and many melodies similar in style and voicing to Boards of Canada. GLAQJO XAACSSO‘s sound signature is also particularly reminiscent of Clark; fat, mid-range digital crunch, an abundance of lo-fi recordings, occasional instruments and an underpinning acid tinge to much of the album’s smeared frequencies.

Structurally the album and its content could be comparable to more modern counterparts, such as the aforementioned Actress’ Splazsh, or Flying Lotus’ Los Angeles; just under 40 minutes long, material is for the most part brief, often built upon loops with constantly manipulated surface material. Larger, rougher edits manipulate tracks as a whole, although these can, unfortunately, become gratuitous, the violent transitions tending to detract from material that would sound better left alone.

The most effective elements of the album are therefore the tracks that retain the most focus. ‘Words Collided’ gives a confusion-soaked yet driven take on techno, constantly cycling rave stabs flashing over stumbling, thrashing percussion and hissing blasts of noise. ‘a.m./soft focus’ compresses a reedy, clattering synthesizer melody to the thump of a tom-heavy beat and a shifting ‘melody’ of filtered static blocks

‘Blush Mosaic’ is a focal point of the album, hi-hats rattling over granular organ and nylon guitar bubbles, a reverb-washed male voice chanting in the background. ‘Fire Dream’ is the record’s strongest track, a thick sawtooth wall of droning, phasing harmonies, overdriven 808s and competing layers of compression shaping the pulse in different ways. ‘Rubylith Film’ is a vivid, intense finale, quite similar to both ‘Wolf Cry’ and ‘Chronic Forms’ by Nick Forte; cloud-like harmony, rolling hushed beneath skittering clicks, thoroughly deserving of an extended edit ten times it’s 1:18 duration.

At this (recorded) point Patten is still mainly the sum of parts, albeit interesting ones, and with a lot of promise. It would be unsurprising if this developed extremely quickly, especially through live shows. However, while Patten may benefit in the long run from some more focus, GLAQJO XAACSSO is refreshing for presenting a particular kind of unbridled, frenzied passion – something music always needs more of.