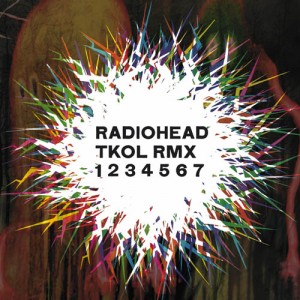 Remix albums, like mix CDs and label compilations, often feel superfluous in 2011. While there are countless examples of individual remixes that overshadow their original subject matter and become classics in their own right, too often entire remix albums are comprised of vaguely connected artists siphoning individual material that they’re probably not hugely inspired by into their own particular style. Let’s face it, 99% of them are vanity projects, and despite an undeniably stellar cast of contributors, it’s hard to shake that feeling when it comes to TKOL RMX.

Taken as a series of singles, TKOL RMX has now spanned seven 12” records released over a three month period and next week will be released as a double-CD. In short, if you’re a Radiohead vinyl collector (and famously, if ever there’s a band that have a fan-base full of collectors, it’s Radiohead), you’re spending close to £50 on records packaged in brown cardboard, with no insert or inner sleeve, for a collection of tracks that will later be released on a CD that costs a fifth of the price.

Now this review’s not here to tell you how to spend your money, and if the music was essential, then you could argue that the cost or format is irrelevant (the remixes have also been released digitally, of course). But for the most part, it’s not. TKOL RMX features 19 remixes in total, and given the quality of artists on show, there are obviously highlights: Thriller’s (usually the work of Actress and/or Lukid) take on ‘Give Up The Ghost’ is slow 4×4 reminiscent of Actress’s classic ‘Ghosts Have a Heaven’, numbed by tape delay and soaked in white, while Blawan and Objekt continue to show off the powerful production chops that have made them so in demand this year. Anstam’s remix of ‘Separator’ starts off unimposing, but by its climax has progressed into the compilation’s most haunting moment, moonlight illuminating the face of a clock tower while loose, demented circles of drums crawl up the walls.

Too often though, the material here is forgettable – what’s the point, for instance, of commissioning another Pearson Sound or Lone remix when there have already been so many in the past two years? Does anyone really get anything out of another vocal garage track from Sbtrkt? All three of these artists are good (in Pearson Sound’s case, he’s one of the best around), but there’s simply nothing interesting about commissioning them to work on a project like this. At a time where every third single seems to come packaged with three or four remixes designed as box-ticking blog fodder, the key way to make a project like this stand out is to give people something that’s not already out there; in short, to be original. If Radiohead had thought a little further outside the box with TKOL RMX (like Ninja Tune last year, when they got Autechre to remix ‘Skeng’ by The Bug), or even designed the records to make them more aesthetically appealing, then we could have ended up with something genuinely interesting. As it is, TKOL RMX is simply that, a collection of remixes that – good as though some of them are individually – don’t add up to anything greater than the sum of their parts.﻿