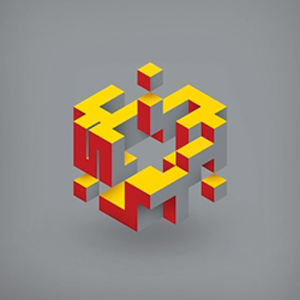 Ed Handley and Andy Turner, together known as Plaid may be old enough to remember when IDM was born (a process in which they played no small part), but as this new album shows, their edge hasn’t dulled with age. Scintilli is the London duo’s first release since the excellent Heaven’s Door soundtrack in 2008, and despite not being written for the screen, it retains the cinematic feel that’s been present throughout Plaid’s career, dating back to their work with Black Dog Productions in the ’90s. It also, naturally, features that “electronic listening music” element so familiar to followers of the Warp catalogue.

Proceedings open with the slightly sad, quizzical piano chords of ‘Missing’, soon joined by twinkling synths and a Hildegaard of Bingen-esque processed female vocal; the overall effect like a lover’s lament in a honky tonk in some far off space port. After a strong opening, each of the next four tracks on the album are absolute killers. ‘Eye Robot’ is a deliciously sinister journey through a threatening landscape, synths snaking around a pounding drum pattern: on point in every sense, while ‘Thank’ raises the tempo with some finely honed loops of analogue blips and ticks – dance music that avoids the obvious. ‘Unbank’ is like a techno rewrite of the Dr. Who theme, with chugging bass, ethereal “alien” singing and Ron Grainer-style guitar riffage over a thumping kick drum. ‘Tender Hooks’ on the other hand combines a pure, synthetic melody with a drum pattern loosely based on reggae. Again, Plaid’s handling of their materials is exemplary, layering sounds and switching focus in a highly effective way.

After that run of brilliance, the rest of the album doesn’t feel quite as inspired, although it’s still quality fare. ‘Craft Nine’ is a pleasant piece of ambience, although rather too similar to Eno’s recent album, Small Craft on a Milk Sea (even down to the title). ‘Sömnl’ shows that Handley and Turner are not too venerable to get down with the kids, incorporating elements of dubstep into their own sound in a way that sounds neither forced nor desperate [Jay-Z and Kanye take note – Ed], but rather wholly natural. ‘Founded’ is a play on folk music with its acoustic guitar sounds and modal approach, as well as a female vocal straight from an android béguinage.

One of the most difficult things for any electronic act is to develop a signature sound without then sounding too samey. Plaid show how this can be done on Scintilli – tonally, there is a strong thread running throughout the album, but each track sounds quite different from the others. The synths and bass of ‘Talk to Us’, for instance, swoop and glides like early Detroit Techno, whilst the programmed drums hint at breaks and hip-hop. The pace then drops again for the twinkling ambience of ’35 Summers’ – cinematic mood music in search of a movie. ‘African Woods’ is perhaps the weakest track on the album, taking the kind of hollow pipes and marimba percussion one might expect from the title in a funky techno direction before running out of inspiration three-quarters of the way through, but ‘Upgrade’ more than makes up for that lapse, as a delightfully distorted rave riff builds into a full-on frantic dancefloor workout.

Calling the final track of an album ‘At Last’ suggests a playful sense of humour, but with Plaid’s latest long player there’s no sense of a penance endured to get there. And the closer itself is a gem, with what sounds like a distorted church organ giving way to a clean, strong melody line (hints of Röyksopp) and uplifting vocal. Probably too subtle to be a dance anthem, and probably better off for it.

Scintilli apparently means “I am many sparks”, and on their ninth album, Plaid show that their creative fires still burn as brightly as ever.