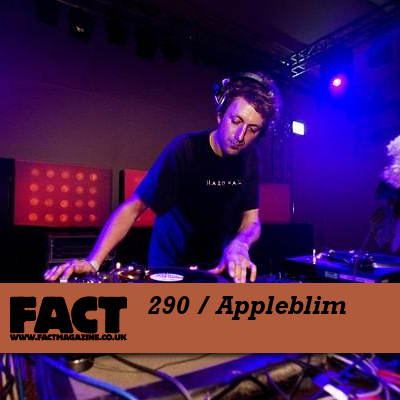 Like our recent Karizma mix, FACT mix 290 is one we’ve been waiting on for a long time.

Appleblim has been one of this magazine’s favourite artists since 2005, when him and a certain Sam Shackleton started up a record label called Skull Disco. Combining the dark, mystikal side of dubstep – and, later, techno – with a specifically British, almost Carry On sense of humour (the label’s name is a play on School Disco, after all), Skull Disco did everything that a great label should: it came, it conquered – releasing several bona fide classic records, including Appleblim’s ‘Vansan’ and ‘Circling’, a collaboration with Peverelist – and then, crucially, quit while it was ahead, after 11 vinyl releases and two CD compilations.

Since Skull Disco, Shackleton and Appleblim’s careers have taken very different paths: where Shackleton has forged one of Europe’s most distinctly individual musical personalities, based around an almost isolationist approach to sound and performance, Appleblim has been getting more sociable than ever. Since 2008, one of his main focuses has been Applepips, his record label that has released music from some of contemporary dance music’s biggest names (T++, Sven Weisemann, Pearson Sound, Martyn, Instra:mental) as well as rising talent from the UK (Arkist, Orphan101, KidKut, plus 12″s early in the careers of Greena and Brackles).

His own productions – more often than not collaborative; as ‘Blim explained in a recent interview, “I think now people are so used to ‘bedroom producers’ being the norm now, you forget that records in the past had lots of people working on them … I like having other people in the room, having a little bop as you make a beat” – have also gone from strength to strength. Last year’s ‘Void 23’, with Pearson Sound, is one of the most overlooked tracks in either artist’s back catalogue, while this year’s ‘Moonlight’ and ‘NY Fizzzzz’, the latter a collaboration with October, are two of 2011’s best dance singles.

Appleblim’s also an illuminating DJ – one of the reasons we’ve been after this mix for so long. His sporadic Rinse FM sessions in 2008 were real treats – John Peel-esque guides through both the best in contemporary and classic dance music, and personal favourites from Appleblim’s past – and his FACT mix, which clocks in at 1 hour 35 minutes in length, is along the same lines, featuring records by Gas, Model 500, Aphex Twin, Cocteau Twins, David Sylvian, Loose Ends, Paul Woolford, Wedge, October and many more.

If you like what you hear, then you should go check him out at Trix, a night at recently revamped South London venue Hidden that are hosting Appleblim, Loefah, Ossie, Mosca, Alexander Nut, Arp101, Funkineven and more this weekend, and who helped make this mix happen. Stream or download it via the Soundcloud bar below.