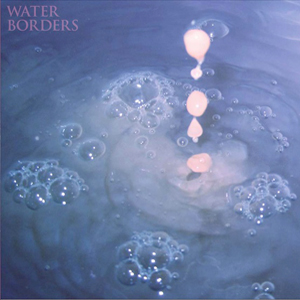 The initially striking press soundbite for this LP is already well-worn: Coil meets Rinse FM. If there’s a problem with this formulation, it’s that it’s too true. Harbored Mantras really does sound like Coil meets Rinse FM, and being informed of that thwarts one’s own sense of discovery. The mystery and personality of the record evaporates somewhat. You listen to the first few tracks and think, I could just listen to Coil instead. Or Rinse FM.

All of which is grossly unfair, because Water Borders are clearly a talented outfit, and their intrepid pilgrimage to the Black Light District on a raft of syncopated dancefloor rhythm is daring, if not entirely successful. ‘What Wiwant’ stands in for the entire album, in the sense that it’s a brilliant idea – combine ping-ponging sub-bass, gothically strained vocals and jagged drum syncopations – but just doesn’t quite add up or come off. They’re clearly going for a disjointed sound, but even so, it’s not hard to see through it: they couldn’t make it coherent even if they wanted to.

The more time you spend with Harbored Mantras, however, the more its scrappiness and wilful illogic begins to enchant you; I mean, at least these guys are trying to be different. The rickety trip-hop of ‘Waldenpond.com’ is a winner, like a less preppy Balam Acab, while the dubby, industrial un-techno of ‘Bad Ethos’ sounds like a Source Direct 12″ pitched down to 33 and set upon by a gang of Tibetan monks.

At some point in the career of great artists, usually early on, their ambition will significantly outstrip their ability. On the evidence of Harbored Mantras, Water Borders have what it takes to one day be called great artists, but they’ve some work yet to do.