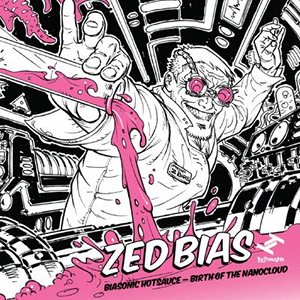 Having never titled an album myself, I can only assume that it’s a tricky business. Whether you’re gunning for wit, hoping to establish an air of mystique or trying to hit home that concept once and for all, titling more often than not reflects the pre-ordained experience an artist hopes a listener is about to go through. So as garage legend Dave ‘Zed Bias’ Jones brings us the first full Bias album since 2007, how do you prepare yourself for an album titled Biasonic Hotsauce – Birth of the Nanocloud?

Mercifully, musical exaction of this palpably weak sci-fi b-movie conceptuality is thin on the ground, surfacing only in four miniscule vignettes (think Viktor Vaughn-era DOOM sans the cohesion) that serve only to uncomfortably plug gaps in an album of such variety that consistency serves little purpose anyway.

Whilst the comic book-styled interludes barely raise more than a nonchalant eyebrow, the album itself is more entertaining fare. Such is the variety show nature of the LP that by the time the Rosco Trim-starring ‘Phonecall’ clacks into life, following tracks featuring Serocee and Dynamite MC, you’d be forgiven for thinking you’re listening to a Toddla T or Major Lazer record. Add to this appearances from – deep breath – Jenna G, Toddla T, MC Rumpus, Nicky Prince, Specialist Ross, Mark Pritchard, Mighty Moe, MdCL and, perhaps more excitingly, Skream and Falty DL, and you’re guaranteed mixed listening.

Thankfully, for the most part the quality level stays high, mostly thanks to the diamond-cut production of Jones himself, who manages to skit effortlessly from the sweat-beaded ragga-skank of ‘Yagga’ to the luminous poly-funk of ‘Koolade’ in only five tracks. Impressive as this is, by the time you’ve nodded your head through 18 tracks that just refuse to sit together comfortably, it becomes an exhausting experience trying to discern which moments were enjoyable and which simply padded the gaps. Falty DL’s appearence on ‘Lucid Dreams’ sees the pair bring forth a smooth and strutting dancefloor cut, whilst Sam Frank turns the vocoder dial to sleazy on the viscous ‘Nightlover’, but the nagging feeling that there are too many ideas here is inescapable – yes, they’re good ones, but selectivity would have worked wonders to carve this bundle of different styles into a sleek, chiselled LP.

Bias seems to take genuine pleasure in exploring on Biasonic Hotsauce, and his unassailable creativity should be applauded. The album’s vagabond sense of fun is infectious and makes for a refreshing contrast to the chin-stroking theoretics of too much contemporary electronic music. This does, however, leave Bias’ opus with one marked flaw: amongst all the fun, the plethora of guests, the range of styles and the scatter-brained joy pervasive throughout, there is an undeniable sense that whilst too many cooks don’t quite spoil the broth, they definitely make the biasonic hotsauce an experience of very mixed quality.