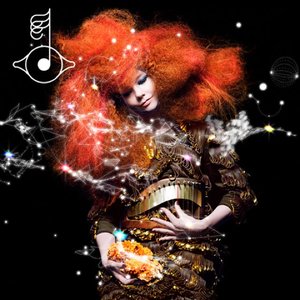 Available on: One Little Indian LP

It’s a miracle that, with Biophilia, Björk hasn’t become a casualty of her own ambition. Being an album that was, supposedly, originally conceived as a museum installation, then an Imax film – born out of hours of research on the subjects of astrophysics, DNA and natural history – by rights the resulting 10-track release should be an unfocussed mess. Moreover, by opting to release the record alongside an elaborate, interactive iPad app, she put herself in real danger of having the actual music drowned out by the tech-scene’s loud proclamations that she’s heralding the future of music consumption.

Miraculously, the end result that has emerged out of all the hype and hyperbole is a beautifully conceived and eloquently executed album. All the press-release fodder about Björk composing parts of songs on custom-built iPad apps, recording pendulums and playing a Tesla coil could so easily have heralded the death knells of an artist who was reaching for unconventional methods to compensate for a lack of ideas. Yet listening to Biophilia it all begins to make a lot of sense. By avoiding traditional pop instrumentation – opting to feature no guitars or live drums on the album – Björk has managed to give the whole record a unique, unified texture. The choral drone of ‘Cosmogony’, for instance, probably wouldn’t sit so well next to the jungle break-driven outro of ‘Crystalline’ if weren’t for the shared ethereal tone of the two tracks’ instrument parts – but she makes it work remarkably well.

On the whole, Biophilia differs from a lot of Björk’s previous output, particularly 2007’s Volta, in the spaciousness of the arrangements and the sedateness of her vocals. Much of the album’s middle section is fairly minimal, with each song seeming like a musical interpretation of its title – ‘Hollow’, naturally, feels like it has an emptiness at the centre of it, punctuated by discordant, almost menacing strings reminiscent of Bernard Herrmann’s score to Psycho. ‘Dark Matter’, meanwhile, consists of little more than hard-to-place, organ-like hums beneath a vocal line that sees Björk drawing out every syllable as if she’s trying to create as much as possible out of the minimal number of parts. More than anything though, this overwhelming air of minimalism merely adds to the impact on the few occasions Biophilia stops pulling punches; the elaborate, beat-fuelled crescendos to ‘Crystalline’ and ‘Mutual Core’ and the chaotic outbursts of ’Sacrifice’ all land with considerable impact amidst the sedate, spacey tone of the rest of the album.

Lyrically however, Biophilia is best when Björk is playing fast-and-loose with her self-imposed thematic constrictions. For all her supposed research on scientific themes, the album’s highpoints come when she is twisting these hints of theoretical language into old-fashioned romantic verses. ‘Virus’, probably the records most beautiful moment, is an expression of longing described in terms of “soft tissue needs blood”, ‘Thunderbolt’ portrays romantic tendencies as a genetic impulse, while ‘Cosmogony’ redraws the creation of the universe as a personal awakening. More than anything else, it’s theses poetic moments that keep the album from getting lost within its own high-concept ambitions.

And so finally, the much-discussed app version. Obviously, given the heavily-publicised level of development, thought and talent that has gone in to them, the Biophilia apps are excellently executed – although the essays often feel like overkill, sucking some of the fun out of otherwise great songs. Statistically speaking though, you probably don’t own an iPad – most people don’t – in fact, the way the music industry is now, the vast majority of people who listen to this album will do so via an MP3 version, and never own a CD copy, let alone an interactive touchscreen version. Ultimately, the apps are just the same as any deluxe, bonus-feature packed boxset edition of an album, albeit a much more forward-thinking, better conceived version. It’s cool, but it would be criminal to think that an app is the crux of what Biophilia is about. To do so would be overlooking the fact that this record might just prove to be one of the career highlights of an artist who’s already had an astonishingly consistent career.