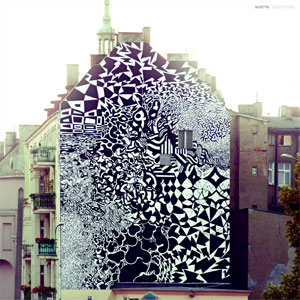 Great Lengths, Martyn’s first album, was something of a touchstone. Released in 2009, after a succession of classic singles (‘Suburbia’, ‘Vancouver’ and his remix of TRG’s ‘Broken Heart’), it wasn’t perfect, but as one of the first full-lengths to be associated with that emerging middle ground between dubstep, techno and house that was so talked about in 2008-2009 (and which seems so natural now), it will always be recognized as an important signpost in modern dance music.

If Great Lengths was a lonely record that thrived on melancholy and solitude, then Ghost People is quite the opposite. It’s the sound of a more satisfied Martyn, one who presumably lives quite comfortably from DJing, and who – quite understandably – tributes this throughout the record; in his own words, “referenc[ing] DJing in general. Not the jet-set DJ life, but the old Paradise Garage DJ life, where people want to share and play the music they really love, regardless of if it’s trendy. Nothing fancy or flashy. Just back to the roots.”

The result of this is the most composed, well-produced record of his career to date – from a technical standpoint, these tracks are faultless. Everything is incredibly complimentary, with the individual elements of each track nicely warmed and positioned perfectly. Unfortunately, although Ghost People never jars, it also rarely surprises. It would be unfair to expect the shock of the new that we got from tracks like ‘Vancouver’ – Martyn’s not a new guy on the block anymore; in fact, he barely was then. But there’s something so predictable about the make-up of these tracks: the bassline and cowbell on ‘Popgun’, the lifeless vocal samples on ‘Masks’ and ‘Ghost People’, the dusty voices and chalky chords on ‘Twice As’. You see them coming a mile off, and although there’s not a single track here that’s bad, it’s also an album that’s severely lacking in “wow” moments, certainly when compared to recent albums by Rustie, Kuedo and Roly Porter.

Ghost People‘s closing track, ‘We Are You In the Future’, is also its best. A combination of starry-eyed keys, rolling drum breaks and a subtly malevolent Reese bassline, it feels like the perfect Martyn track, drawing from both his drum’n’bass past and the unashamedly romantic hew of both Great Lengths and classic Kompakt techno. Most crucially, it’s the only track here that really grabs you by the balls; it leaves you gutted, winded and wanting more. And as a reminder of what Martyn can do, it makes the rest of Ghost People pale in comparison. For many, this album would be an achievement; from Martyn, it’s not unfair to have expected more.