“The enthusiasm is always genuine”. Meet the South London house producer who’s permanently in the mood to swing. 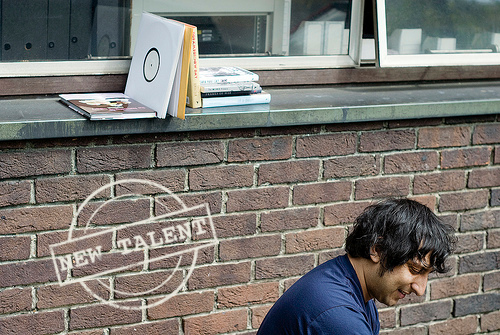 In a recent interview with FACT, high-flying London producer Mosca lamented the current lack of groove and swing in UK dance music.

One man who this accusation couldn’t be leveled at is West Norwood Cassette Library, a man who’s been releasing records under various guises since the mid-’90s, but in the last two years has found a niche for himself making ragged house music where groove is everything.

As informed by classic 2-step and hip-hop as the obvious touchstone that is mid-’90s house, WNCL makes dance music that’s equal parts studied and playful. And refreshingly, his attitude to promotion is British and old school: those on his mailing list will receive cheery, Mordant Music-esque updates on his releases and gigs, and the best place to find information about him is his blog. He even DJs off vinyl and acetate dubplates. Who’d have thought it?

FACT caught the last train to Norwood to discuss WNCL’s beginnings, his label, and why his enthusiasm is always genuine.

First off, the name. When I first heard it, I thought you’d be some sort of hauntologist. What made you choose it?

“I have had some previous dalliance with the dreaded H but WNCL is a separate thing. Visually, I’m still referencing the aesthetics of classic library recordings but the name is just a silly in-joke. However, over the last year or so, having said it thousands of times, it doesn’t seem so funny any more.”

Do you record onto tape? Your productions always sound lovely and warm.

“Thank you. There’s no tape involved but I’m not bouncing trax down purely digitally either. It’s a bit of a confused set-up – very make shift and a little embarrassing but it’ll do for me.”

You’ve been releasing music since the mid-’90s, under various names. I’m not rude enough to ask your age, but I’m presuming you’re older than a lot of the artists that people might consider your peers. Do you think being slightly older gives you a different perspective on dance music? The vibe of your music’s at a real natural middle ground between studied and playful, and I suspect your experience might have something to do with that.

“Possibly. When my first records came out, I was too in awe of the whole thing to take the reins. Consequently, it feels like a messy back catalogue. WNCL is definitely phase two of my involvement with music and it’s consciously uncompromising right down to the point size of the text on the label artwork.

“Maybe age has given me the confidence to do that but I don’t think that’s true for everyone. I know a lot of younger people that I would credit with being far more sussed than I ever was, am, or could ever be.”

Obviously garage and house are constants in your music, but are there any specific artists or scenes that have been particular inspirations on you over those years?

“The usual legends and elder statesmen of house and techno hold their rightful place in my personal history but in terms of wanting to put out records, specifically a house record, I would give full props to Roger ‘Wildchild’ Mackenzie. In the early ‘90s, he was dubbed ‘the UK Todd Terry’ and his Wildtrax series seemed to come from the same places that I was lurking in – late 80’s, sample-heavy hip-hop with fierce house beats and a nod to the burgeoning UK breakbeat / hardcore scene.

“I started sending demos to Bush Records and Loaded in Brighton solely because he had records on both labels. I spoke with him once on the phone (he worked at the Loaded offices) and he was a really warm, lovely, encouraging guy who politely ignored the fact that I was sending him some God-awful tripe on cassettes and instead told me to keep going. He eventually had a major hit with ‘Renegade Master’ but tragically passed away at an early age. I always keep a few of his trax in the record bag and they still sound fresh.”

“I still get gripped with panic when I realise such and such a record is limited edition – you’ll often catch me running around Soho at lunchtime trying to bag a copy.”

When did you officially open the West Norwood Cassette Library for business, so to speak? And what were your initial intentions with it?

“The doors opened for borrowing and lending around 2006. I’d started a new job, got a bit of new gear and had come out of the other end of a healthy break away from dance music and found myself wanting to jump back in again. The initial intention was just to see if I could get it together to finish a tune again, maybe play some records out every now and again. The blog followed a little later and the label seemed a natural next step.”

Did you originally start the WNCL label as an outlet for your own productions?

“Yes, very much so. I was only ever going to put out a couple EPs of my own stuff but getting Brackles to remix ‘What It Is’ and finally getting my hands on DJ C’s ‘Jump Up and Bounce’ started to make the whole thing feel like a ‘proper’ label rather than some vanity project, so I ran with that.”

As we’ve said, you’ve been releasing music for a little while, and there’s always that loveable uncle feel to the West Norwood mail-outs – they remind me of a less grumpy version of the Mordant Music Missives, in fact. Given that you’ve seen the record industry shape-shift dramatically in the last ten or fifteen years, is it hard to stay positive when records just aren’t selling like they used to? Or are you as genuinely enthusiastic about dance music as you ever have been?

“[laughs] I have been getting mail-out envy recently – everyone seems to have these colourful flashing newsletters nowadays with pictures and everything but I think I’ll stick with the scissors-and-glue fanzine approach. The enthusiasm is always genuine – there’s no point in doing any of this otherwise. I still get gripped with panic when I realise such and such a record is limited edition – you’ll often catch me running around Soho at lunchtime trying to bag a copy.

“As far as WNCL is concerned, I’m under no pressure to do any of this so it would be pointless to keep putting out records or playing in clubs if I had no enthusiasm for it.”

Your own productions have a particular feel to them that binds them together, but the music by other artists that you release on West Norwood is a bit more wide-ranging (I include the remixes in this, which seem to be a big part of the label). Now that you’re eight releases deep, have you started to notice a trend forming amongst the label’s releases, or does it still seem pretty disparate?

“Other people tell me there’s coherence to the releases despite the varying tempos and styles. I agree but I cant put my finger on why that is exactly other than these are all tracks and remixes that I absolutely adore. Don Froth and Ultramarine seem to be unlikely bedfellows on the face of it but they both feel at home on the same label.”

What’s next up on the label, and what plans do you have for the future of the Library?

“Label-wise, Don Froth (WNCL007) is in shops now, Ultramarine (008) is not far behind it and Knowing Looks (009) will be with you before Xmas. And then I might allow myself a little lie down.