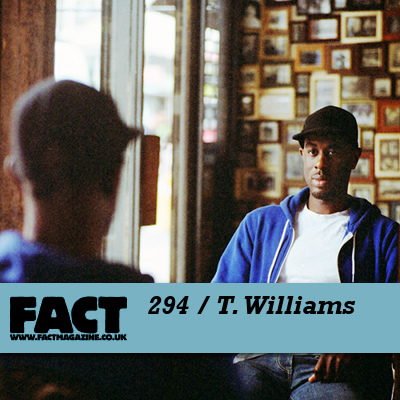 FACT mix 294 is an all-vinyl session from Deep Teknologi label boss T. Williams, one of the strongest UK house producers of recent years.

Williams has only been releasing records under his real name since 2010, but he’s been “in the game”, so to speak, for much longer. As Dread D, Williams’ original production alias, he was responsible for several early grime hits, rolling with Jon E Cash’s legendary Black Ops crew and pushing an ultra-heavy, 8-bar sound synonymous with the genre’s formative years.

It’s since turning his hand to the ruffneck house of T. Williams however, that his music – not to mention his profile – has gone from strength to strength. His three-track, mid-2010 debut for Local Action was swiftly followed by the Latin-inflected 4×4 of ‘Chop & Screw’, released on Williams’ own Deep Teknologi imprint, and he closed the year on the double salvo of ‘Heartbeat’, his irresistible, Terri Walker-featuring vocal house anthem (memorably remixed by Mosca, and later, Paul Woolford), and the siren-driven ‘Getting Mine’ on Enchufada.

2011 has seen Williams mostly focus on his DJ sets, his record label Deep Teknologi (home of J Bevin, MA1, former FACT mixers JTRP and more) and remixes, with his takes on Breach’s ‘Fatherless’, Skream’s ‘Where You Should Be’ and Maya Jane Coles’ ‘Nobody Else’ notable highlights. This month though, he returned with his first solo single since last December. Titled ‘Break Broke’, it’s perhaps Williams’ heaviest house track yet, driven by a hip-hop-influenced sense of bump and swing.

His vinyl only FACT mix isn’t afraid of drawing for the classics, leaning on the tracks that Williams claims to have inspired him most over the years: house from Kerri Chandler and Bugz in the Attic, snapping garage from Zed Bias and Groove Chronicles, and memorably in the mix’s final moments, grime and jungle.

Photo credit: Will Biggs for Hyponik