Keyboard Kid: The Mind is so Complex when your Based 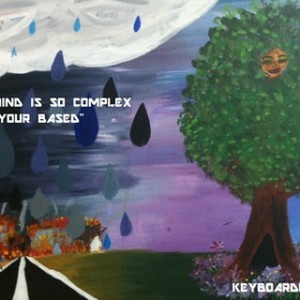 It’s true, things are complex when you’re (sorry, your) based, and they’re presumably a little more complex for Keyboard Kid 206 than they are most. The Seattle-based bedroom producer has been one of the main beat-makers for pop culture phenomenon Lil B since 2010, but for whatever reason, hasn’t yet received the same plaudits that Clams Casino – the other one of Lil B’s most trusted producers – has.

The Mind is so Complex when your Based (come on, say it again, that is a great title) is Keyboard Kid’s fourth instrumental mixtape by my counting, and all the material here is instrumental. Apparently, unlike Clams Casino’s already classic Instrumentals mixtape from the start of this year, none of these tracks have already been released as vocal tracks, but like that Clams tape, they all stand on their own two feet taken as instrumentals. And as clichéd as it sounds to keep comparing Keyboard Kid to Clams, the two producers might as well be two sides of the same based coin.

The Mind is so Complex features a lot of the traits you’d expect of it from the off: slowed down and reversed female vocals (Imogen Heap features frequently here, as is the based way), drum rolls faded by washes of watercolour soft synths and reassuringly raw sample-chopping. Unlike Clams’ tracks, which sometimes have so much packed in that they become disorientating, Keyboard’s productions here have a lot of space to them, letting those washes of colour fade into the ether and interact with each other in a slightly freer way. They’re also darker than you might expect: where as a lot of Keyboard’s productions for Lil B are content to simply sound ethereal, at times the tracks here feel unholy. ‘NW God Music’ in particular sounds Hellish: a reversed choir slowly being lynched by a venomous synth rattle.

Ultimately, The Mind is so Complex doesn’t quite have that classic feel that Clams’ mixtape from earlier this year did, but that’s probably just a case of timing. As the trap rap 808 style gets rinsed ad infinitum, the based sound still sounds pretty fresh, and with this entire mixtape priced at $1.50, who are we – or anyone – to argue?