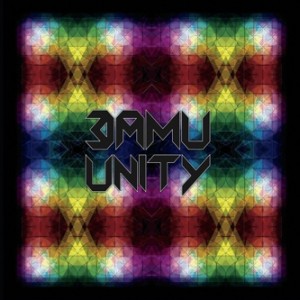 2011 has been a fantastic year for anyone with a penchant for sweeping electronic atmospherics. The chaotic, neon-lit modernity of Rustie’s Glass Swords, the cavernous wastes of Hyetal’s Broadcast, the shadowy urbanity of Sully’s Carrier or the dystopian skulk of Kuedo’s Severant: sonic landscaping has ruled the long player roost in a remarkable way. This considered, it’s difficult to know what to expect from Manchester’s Damu on his first full-length album. A producer boasting a small catalogue that, to date has always straddled a line between club-ready bombast and evocative futurism, the outcome was never a sure thing, but on Unity, he manages to achieve the best of both worlds. Rather than transporting you to dimensions afar, Damu opts simply to make the dancefloor a more otherworldly place.

Where past EPs ‘Mermaid’ and ‘Ridin’ exhibited a producer whose uniquely crystalline arpeggios and pitched-up vocals were primed for clubs worldwide, Unity takes on more of a home listening form. There’s still plenty within this album to raise the pulse – the Trim-featuring ‘Ridin’ the Hype’ and steel-drum led ‘L.O.V.E.’ excel in their straight drums and melodic simplicity – but tracks like ‘Unity’ or ‘Weapon #3’, reverb-washed and sans drums, seem deliberately made to counter that oft-feared lack of cohesion that can mark the difference between an immersive electronic music album and a simple collection of dance tracks.

This mostly works nicely. Typically clattering, percussive Damu moments like ‘Plasm’ are imbued with a deeper sense of purpose; a foggy and absorbing ambience that carries over through vaporous motifs. Sometimes however, these atmospheric tropes seem less than capable of holding these moments together. It’s not as if anything here is uncomfortably paired – the album never feels like a ramshackle collection of tracks, nor does it ever feel unconsidered – but sometimes it feels less than wholly cohesive and a little confused: you’re never quite sure whether the dizzying synth workouts of ‘Waterfall of Light’ or ‘After Indigo’ are about to descend into an atmospheric abyss or ramp the drums up to 11.

In many ways though, this is Unity‘s charm. Damu’s ability to consistently flummox and surprise the listener across this LP’s hour-long run-time should at least guarantee reactions, and more than ever electronic music could do with a few curve-balls. And while his debut album might not quite be the science fiction epic that some of his aforementioned peers have crafted this year, at times it sounds in a league of its own: with eyes bigger than just the dancefloor, it’s a curious, irrepressible and often irresistible listen from a producer already achieving great things.