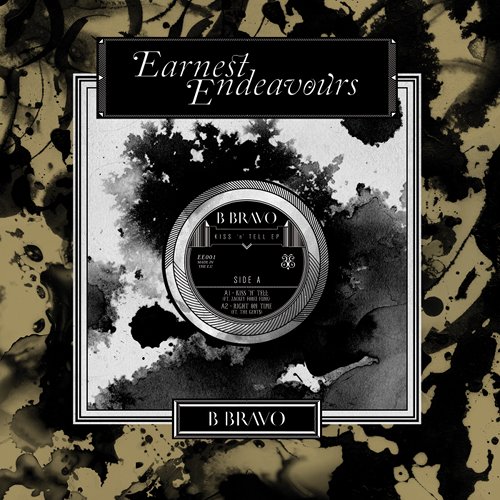 Beyond just the overwhelming proliferation of “beat scene” producers, California is home to a whole host of boundary-pushing artists. Whether you’re looking through the eyes of the considerable Alpha Pup juggernaut or Salva’s Frite Nite collective, there’s no shortage of impressive music being made in Los Angeles, San Francisco, et al. B Bravo has been one of the latter city’s most promising but hidden talents for a few years now, even being cherry-picked by Gilles Peterson but not making much of a splash outside of his solid fanbase on North America’s West Coast. With the launch of new London label Earnest Endeavours, however, that might just change.

Why should you care about B Bravo? Because the producer has an authentic grasp of vintage soul and funk that extends beyond the surface-level gimmicks of so many tracks content to throw some g-funk squiggles and bumping basslines onto an otherwise generic template. Mr. Bravo – not so much. ‘Kiss N Tell’, with a typically breathless vocal from Zackey Force Funk, is a sumptuous feast of playful but precision drumming, his signature wavy brushstroke synths, and a bassline where every compressed turn sounds improvised and natural. It feels completely analogue, lacking the quantized quarantine that renders other producers fatally funkless. ‘Right On Time’ does ‘Kiss’ one better, turning up the lushness dial another notch with arpeggios that dot the sky in fluffy pink clouds, a spacious but detailed bed for equally smooth vocals from Chicago trio The Gent$.

The EP’s highlight is definitely ‘Substance’, which splays Bravo’s heatsick hissing melodies and breathy vocals from one-time 4Hero vocalist Lady Alma over a gently pulsating, skittering 808 beat that quickly switches from footwork tapping to bucking wildly and back again. The EP is rounded off with ‘Swang’, which demonstrates that Bravo’s music is just as effective without vocalists, all jets of neon and silkily contorting melodic phrases.

What’s most intriguing about these tracks is that they they aren’t just “bass music” with vocals pasted on top – Bravo’s productions are organic and tailor-made to the vocal down to every last detail, so it works just as well as a retro-futurist take on r’n’b as your latest funk-infused take on dubstep/garage/house. Perhaps the biggest compliment I can pay to anything on Kiss ‘n’ Tell is that ‘Right On Time’ is basically a Ryan Leslie track with better production. Need I say more? Whether you’re coming at this from a “bass music” angle, an r’n’b angle, a hip-hop angle, whatever, it doesn’t matter, because when music is this effortlessly seductive, he won’t even have to try and you’ll be melting into his arms.