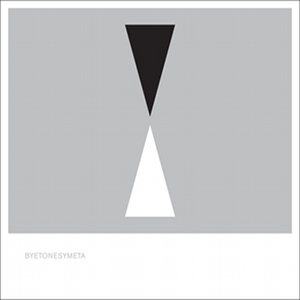 It’s been an interesting progression to watch, Raster-Noton’s movement from an ultra-obscure imprint dealing in unusual editions of sometimes extreme music often billed as “difficult”, towards a position as a gratifyingly well-regarded, multi-disciplined label that still takes risks as well as being able to release music that can cross over to marginally more mainstream press outlets. One of the records that helped foster this progression was Byetone’s Death of a Typographer, which retained the steely austerity of previous work but grafted it onto the development and warmth of contemporary techno and electro. Thanks in part to a preceding 12″, ‘Plastic Star’, with some extremely club-friendly remixes, the album set out Byetone’s stall as potentially the artist on the roster who was best positioned to push the dancefloor-friendly side of the label further onwards.

Symeta, although not a step back from this, is a sideways step instead. From the first clipped beat of opener ‘Topas’, it sounds like more of the same, but a more than cursory listen reveals that there’s something different going on underneath the trademark Raster stripped back percussion. The accompanying press refers to the “live” sound of the album, and to the influence that rock music and a “high-speed heavy metal session” had upon it. And whilst there are no covers of the Stooges as heard on sometime label mate Mika Vanio’s album from earlier in the year, there’s a definite feel of the tropes of live guitar music being played out through the machines.

The end result, probably not that surprisingly, carries strong traces of Suicide and even the likes of Chris and Cosey or Joy Divison, with strong blunt riffs moving against creaking atonal dissonance on places before being leavened with restrained harmonies. ‘Neuschnee’, a highlight, drops the tempo down against a simple pulse, layered harmonium-like droning chords moving against the sound of metal. ‘Helix’ meanwhile, distorts a synth line into fuzzed out late ’70s tones that call and respond with a classic Raster beat and bursts of chords.

As the album progresses, it dips further and further into the “live” sound, with the distortion increasing and the drums taking on a leaden, lumpen thwack. It’s here that things convince less, however – in moving the sounds, particularly the drums, away from the usual Raster click and slice austerity, they become familiar and almost trad sounding. After the preceding tracks and the intricate sound design of the rest of the material, hearing the hollow hit of something as seemingly pedestrian as a drum machine is a bit of a disappointment.

Symeta is an interesting album, for sure – and a direction which will no doubt bear further investigation over more releases. It’s interesting to consider what an album like this would sound like if approached from the opposite direction, through a rock/metal standpoint – perhaps that might itself yield beter results next time round.