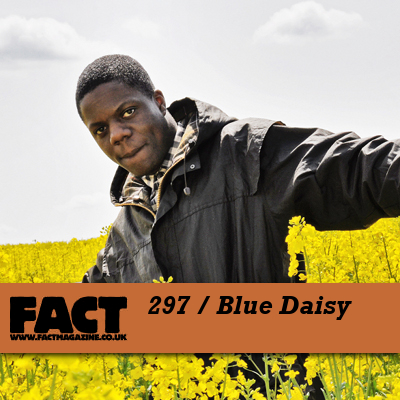 FACT mix 297 is an ominous session of clouded-over pop by Blue Daisy.

Hailing from North London, Blue Daisy hasn’t released much – until this year’s debut album, The Sunday Gift, he’d put his name to four singles and one split, all on Black Acre – but he’s made it count, quietly honing a smoky form of pop music that owes as much to back room ’90s icons like Portishead, Tricky and, going further back, the Cocteau Twins as it does the structural freedom of Flying Lotus and Samiyam’s twisted hip-hop.

The Sunday Gift is, frankly, the best thing Blue Daisy’s done by miles. A mostly collaborative project, it finds him assembling a small team of trusted vocalists and neatly sidestepping the beat scene or dubstep associations that some cast on him; unlike the work of many of his peers, this is genuinely dark, harsh music that barely makes sense outside the night hours, and Blue Daisy doesn’t need to sample speeches from sci-fi films to prove it.

His FACT mix, sub-titled ‘Soundtrack of the Night Sky’, doesn’t have a tracklist, but it’s in the same vein as the album: downcast pop, haunted hip-hop and tons of reverb. It’s great, basically. Download it below, and read the following Q&A with its maker while you do so.

We were really impressed with The Sunday Gift – it seems a really dark album, with emotional weight to match the musical weight. I don’t know if there are many of your contemporaries who’d have the balls to make an album this slow, and at times bogged down in smoke and tar. How did the album end up sounding the way it did?

“Thank you very much, glad you are liking it. The album to me was a natural inner process, natural in the sense that it is not me trying to be something I am not or trying to create a sound that would fit in with “today’s” expectation of “beat scene” producers and to be honest I have never regarded myself as part of the “beat scene”, or any scene at that matter. It’s all soul and emotion from me, it’s giving you an insight into my mind, my world. I don’t plan when I make music, its just a matter of being in a zone, I just let my spirit run free and let the musical realm take over.”

How did you meet the vocalists who ended up on the record?

“I met each vocalist in different ways. Mine and Anneka’s connection came about 2/3 years ago I think, she got in touch with me on myspace and said she was really into what I was doing and that she’d like to work/collab on something, so I checked her out and man, I was literally blown away. I hit my workstation straight away and started on a few sketches which I then sent her and thats how our Raindrops EP was birthed. I connected with Anneka’s voice so much that I knew she’d have to play a part in the making of the album.

“Me and Stac connected in a similar way but on this occasion I got in touch after seeing her music video on Kato’s work:ethic site. She took aaaggeesss to get back to me so I kinda thought she wasn’t interested but she finally hit me back and boom, our flourishing relationship came to light. Stac is like the older sister I never had, she’s just an amazing person and holds an amazing gift for song writing and arranging.

“Heidi Vogel [laughs] that’s a story. When I first met Heidi I didn’t know who she was and she didn’t mention it either, we were en route to Soundwave Festival and caught the same coach from the airport, I was rocking around topless and she just kept mocking my nipples and saying ‘put them away’ [laughs]. We just clicked straight away, then I saw her perform on the last night with Cinematic Orchestra and was literally weak at the knees… now that could have also been due to my drunkeness on the night, but she was awesome so I told myself ‘must get Heidi’, and I can honestly say I’ve never worked with someone who works so effective yet so effortless. She’s phenomenal.

“The track with Heidi on the LP also features the talents of the amazing Gillian Woods on the cello. Gillian also wrote the strings on the ‘Fallin’ interlude… I had never worked with live strings before but Gill made it so easy to connect, she fully understood the music and wrote me some beautiful “tearful” string sections, she really did bring a new light to the album.

“And Hey!Zeus has been my hype man from my 1st ever live set , we’ve worked closely together for years. One of the best rappers in UK in my opinion.”

Did you always want to make a vocal-heavy album? And given that it is, really, a quite dark experimental pop album in the same vein as Codeine or Cocteau Twins, were there any pop acts you specifically had in mind when making it?

“Yes, it was always my plan to make an album with vocalists: I work best with vocalists, I like the idea of manipulating voices and treating them in unthinkable ways. It was the plan to have the whole album feature vocals initially but that changed. I am more of a producer than a beat maker so working closely with vocalist has always been my preferred approach. The closest pop act that played some form of influence I would have to say [is] Fever Ray, the coldness yet warmth of the Fever Ray record is stunning, yeah so I’d say Fever Ray, I’ll just put it out there… Fever Ray get at me! [laughs]”

How long was The Sunday Gift in the making, and were there any incidents that particularly shaped its course along the way?

“Oooff!! I think the final completion of The Sunday Gift took about a year. I had sorted production on the album within 8/9 months but the final additions, i.e. strings, re-recording of vocals, mixdowns, had me working a few months after to get it right and to be honest the album only came together properly in the last week of the submission date. Man I grafted that week, I feel like I made a whole album in that week alone, but that’s when I felt like ‘Yes, its time!’

It’s been released on Black Acre, but a while back you were Tweeting about signing to Island. Is that still happening?

“Man that was an April Fools that kinda got out too far! I didn’t even think people were going to believe it but nah no Island Records deal yet. Who knows though aye? One day… I’ll just put this out there too, Island get at me! [laughs]”

“I actually called this mix ‘Soundtrack of the Night Sky’… It’s just basically a soundtrack of the night, it takes you through the night air and its description would be dark, eerie, atmospheric and schizo… Opening line in the mix: ‘You got about one hour to think about what you’ve done to me and think about it’. It’s a journey, a whirlwind of sounds and a insight into the peripheral of my nocturnal vision.”