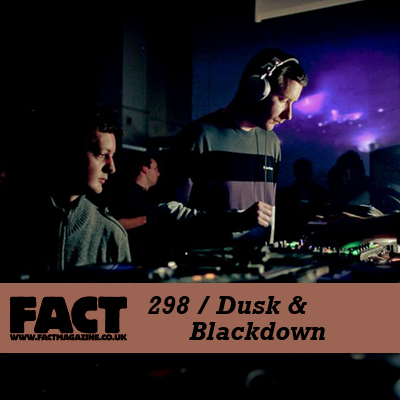 Dusk & Blackdown are another of those acts that we’ve been asking for a FACT mix from for years.

Last month, they submitted it, and we’re glad they chose to wait. In late 2011, the pair’s Keysound label finds itself on an all-time rich run of form – and it pays to bear in mind that this is an imprint that’s released music by Burial, Skream, Zomby, Durrty Goodz and more in the past. Albums have arrived from some of the UK’s finest acts in Damu, Sully, and most notably, LV & Joshua Idehen with the remarkable Routes, while the elusive LHF collective continue to use Keysound as a key incubation chamber for their unique, deceptive dubstep. They’ve also signed a future single from Logos, who’s been twisting Wiley’s eski template into his own isolationist creations and creating some of 2011’s most promising music in the process.

Blackdown famously has a way with words, so when it comes to describing him and Dusk’s FACT mix, we’re happy to defer. The pair will be playing for Found & Days Like That’s Heritage night at recently revamped South London club Hidden this Friday, alongside some of garage’s all-time greats in Matt Jam Lamont, Slimzee, Groove Chronicles’ Noodles, El-B, Dem 2, DEA Project and more.

“Our friend Sekkle said to me recently “on any given day, on any hour, someone is hearing dubstep for the first time, and being influenced by it,” and it’s true, dubstep’s now big news, big business. Throughout its lifetime, different people have discovered it at key points, whether they’re hearing Skream and Skrillex in 2011, went to DMZ or heard Mary Anne Hobb’s “Dubstep Warz” showcase in 2006 or went to Forward>> at the Velvet Rooms in 2001.

“Yet as the scene gets bigger, it’s fair to say that a smaller and smaller percentage of people will have encountered the dusty white labels and obscure limited pressings that got dubstep to where it is today. So to celebrate our set at Heritage, we wanted to shed some light on those foundational releases often referred to as the “Roots of Dubstep,” without which there would be no dubstep.

“The mix is bookended at one end by some late ‘90s New York and New Jersey garage, with all its warmth and 4×4 swing and at the other by Loefah’s first release, “Jungle” on Big Apple records. In between it descends into a lost, edgy hinterland, a percussively diverse space between that warm swing of garage and cold, b-line driven dread that would characterise large parts of the 2004-06 second wave of dubstep.

“The mix involves some of the essential names in the birth of dubstep (El-B, Zed Bias, Arthur “Artwork” Smith, Horsepower) but also tries to encompass those who had a more fleeting contributions like Ghost Camp member Es-G, junglist DJ Hype, American producer Abstract, garage legends Ras Kwame and Steve Gurley. And of course there’s the future dubstep heavy hitters Skream and Benga, who would later combine with their mentor Arthur Smith to form Magnetic Man.

“The mix references the past, like the MAW-sampling remix of Sounds of the Future, while also hinting what was to come. It tries to capture a fleeting moment of a scene in transition, where dynamic tensions like Missy Elliot acapellas underpinned with dark junglist percussion form delicious contradictions; a sense of both confusion, wonder and opportunity. Not unlike how we find ourselves today, eleven years after dubstep began.” – Martin ‘Blackdown’ Clark