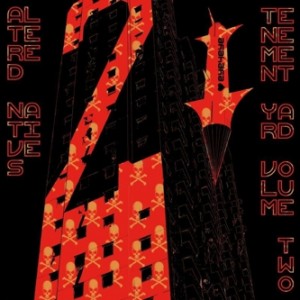 The opening track of Tenement Yard Vol. 2, the latest album from London house roughneck Altered Natives, is titled ‘Loved by Few’. Which prompts the question: why is Altered Natives so underrated? He’s got the backstory, doing his time in London’s broken beat underground before being picked up on by the more switched on corners of the wider UK dance spectrum last year. He’s had his Big Tune in ‘Rass Out’. He released one of the best dance albums of last year in Tenement Yard Vol. 1, and followed it with work for labels like Hyperdub and Martyn’s 3024, while also picking up support from your Night Slugs and so forth. By rights, he should be treated as a king.

Maybe he’s just too heavy; too uncompromising. Natives has spoke before about the importance of his tracks being “bruk” – drums that feel broken to the point where there’s internal reverberation from the hollowness, grubby basslines that feel like fucked up memories of the classics – and although Tenement Yard Vol. 2 isn’t quite as relentless as its predecessor, it hardly pulls punches. The piano-driven ‘Illuminate’ is about as accessible as this record finds Natives, and even that’s marked by burnt reverb, ominous kick drums lurking in the middle distance and points where the piano seems to detune itself. For the most part, these are heavy tracks for the DJs and the heads: the rumbling ‘Shake That’ has one of those drops that only a proper soundsystem can do justice to, while ‘Die 4 U’ could be an anthem for the future garage wibblers if it wasn’t for those rickety drums and monster kicks beating down the vocal refrain at any opportunity.

Which isn’t to sell Tenement Yard Vol. 2 short. Yes, these tracks are heavy – some of the heaviest you’ll hear on any record released this year – but it’s also clearly quite a personal album; one that, on tracks like the incredible ‘Wasteman of Love’ (other telling titles include ‘Can’t Trust Myself to Trust You’ and ‘Legendary Suffering’), expresses regret and emotion with malevolent pounding rhythms as opposed to polite 2step. Anger and sadness are never too far apart, and it’s refreshing to have a dance record that express them both equally. As Tenement Yard Vol. 2‘s seventh track states, this is Altered Natives’ game and his rules: let’s hope he never changes, and that we’ll still be forced to play by them come Vol. 5.