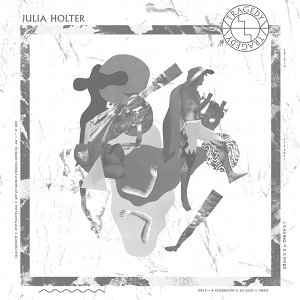 This has been something of a massively superior year for the drift – superb transmissions from Tim Hecker, Grouper, Christina Vantzou, Kyle Bobby Dun, almost anything on the Low Point label, the wildly-fucked Ship Canal, Pan American, Fedicia Atkinson, Ensemble Economique, KWJAZ, Vladislav Delay, Sun Araw… Hell, I’ll happily argue that Thundercat’s The Golden Age of Apocalypse should be in there. At a stretch.

But here, towering over all the former and everybody else in 2011 is this completely unique, beautiful, baffling and brilliant fucking planet of an album – Tragedy by Julia Holter.

Conceptually rooted around an atmospheric “interpretation”of Euripides’ Hippolytus with an introduction, interlude and finale, Tragedy utilises voice, synths, drum machines, piano, cello, saxophone, samples, vocoders, ensemble musicians [CalArts New Century Players] and a chorus. Most lyrics are lifted directly from sections of the play (listed in narrative order) but “positioned by an aural logic rather than in the chronological order”. Holter has studied Electronic music at CalArts, worked with Human Ear (occasional home to Ariel Pink and John Maus) and has been collaborating of late with Linda Perhacs (of which more later) as well as juggling a variety of cassette-based projects with at least one more unreleased album in the can. But it’s this album that has drawn so much recent attention and the reason for this is simple –you’ll have rarely heard anything like it.

‘The Introduction’ is a gently head-wrecking three minute constantly mutating collage starting with insectoid buzz, starkly cold and isolated foghorn (weirdly displaced from any other environmental sound) quick bursts of sampled choir, opera and brittle strings – like constantly dialling a radio through channels of Hitchockesque noir. A muted instrument moves in intimately, initially muted and you experience a slight disorientation as it occurs that this is actually a voice. A brutal cut, a moment to breathe then hissing voices, trumpet-shell blow, more voices split between serenity and somewhere in the background something more insidious. ‘Try to Make Yourself a Work of Art’ explodes in to a clattering dirge – flat-bells maybe, percussive dissonance like an electro-acoustic savvy version of Nick Cave circa From Her to Eternity but also nowhere near – robotic chanting “What your mind/ so sound and safe/ cannot know. This was my plot.”

‘The Falling Age’ starts sweetly, melancholy over languid vast synth tones, immediately heart-ache affecting as Holter delivers a deeply poignant voice singing, “See, here the wretched sufferer comes / His youthful flesh and golden hair / have lost their beauty” before dissolving in hallucinatory fashion into a more menacing series of synth drones with background orchestral disturbances. The truly peculiar atmosphere here is not a million miles from Julee Cruise’s magisterial Floating Into the Night – dark troubling ambience evoked through the warmest of tones – emotionally disorientating sonic surrealism of the highest order. It’s impossible to convey the absolute shock, surprise and joy of what happens next, when ‘Goddess Eyes’ jolts you out of wired reverie with a mind-blasting and weirdly dry vocoder, Holter in another different voice, intoning “I can see you/ but my eyes are not allowed to cry…” as piano and synth melodies emerge to support the minimal electronic bass line. Laurie Anderson may be an obvious parallel to draw on here but it’s fair one – the out-of-usual-context appearance of the vocoder sounding as beautifully fresh as it did on ‘O Superman’ all those years ago.

This is ambience as explored and defined by David Toop in Ocean of Sound and over a string of records in the 90’s (alongside other luminaries such as Paul Schütze): the constant movement of sound and incorporation of non-musical elements – samples, instrumentation and field recordings played live and re-edited – the breakdown of boundaries between useless ideas of what is organic and what isn’t and the dissolution of pop and avant-garde. Pull anything out at random: five minutes into ‘Celebration’ there are organ drones, echoing vocals, fizzing drum machine before weird rumbling swells encroach on the horizon, a piano comes to prominence, Casey Anderson squeals some improvised saxophone. The rolling piano is suddenly subjected to a couple of brutal cuts, the drone vanishes and a car rolls into earshot. One minute you’re in one place and the next you’re somewhere else entirely and you have no idea how you got there and yet you’re still in motion.

Julia Holter’s current association with Linda Perhacs speaks volumes although apparently Holter had not been aware of her work until recently. In 1970 Perhacs released the astonishing Parallelograms album, the title track of which notoriously collapses from meditative folk song into psychedelic concrete without warning in a truly bizarre, head-wrecking yet paradoxically coherent move. And this is written all over Tragedy – completely unpredictable yet entirely logical.

But if this all sounds very clever (ostensibly because it is very clever) it’s vital to understand just how emotional Tragedy is. The flow of sound and the remarkable journey Holter takes you on; across the whole of its 50 minutes you’re never less than captivated, enthralled and entirely lost within the peculiarities of its world. It’s the most remarkably sophisticated derangement of the senses I’ve heard in 2011 and although I can’t generally stand to say such things, to consider this as anything less than one of the very best albums of the year would be demeaning.