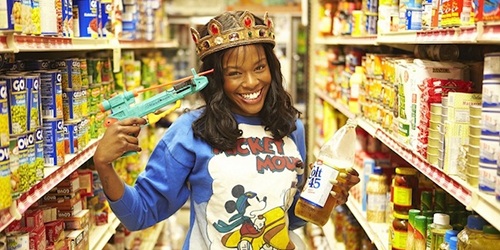 Azealia Banks is “very close” to signing to an undisclosed major label, and is working on a debut album with producer Paul Epworth.

Harlem singer and rapper Banks has been kicking around for a couple of years, but it wasn’t until this Summer’s YouTube hit ‘212’ – a club-ready tribute to oral sex – that she really started to break through. She’s already developed a sizable phonebook: Epworth is one of the biggest record producers around, having most recently worked on Florence + The Machine’s Ceremonials and Adele’s 21, and she’s collaborated with Lunice and Machinedrum. There’s even a Jacques Greene cameo in the video for ‘212’.

Pitchfork broke the news in an interview this week, where Banks claims that the album will feature a mix of  “212-style, house-heavy pop along with some “rap-bitch shit” and “winter wonderland R&B that’s kind of like Aaliyah”.

She goes on to explain that “I’m not really scared of major labels. I just want to work where I’m allowed to make mistakes and do my own thing rather than getting into a situation where someone else has their own agenda of what they want me to be”, revealing that she’ll be moving to London to record the album.