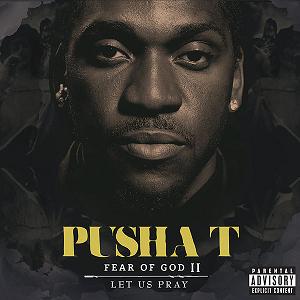 Pusha T, what happened? One half of Clipse, Pusha was once one of the coldest, smartest rappers in the world. On Fear of God II, his second full-length release for Kanye West’s G.O.O.D. Music label and effectively an album version of the first Fear of God mixtape (it features a combination of material from Fear of God and new tracks), he still sounds cold – but it’s now in a lifeless, sterile, clinical sense.

Considering the quality of Clipse’s past material, both on albums and mixtapes, Fear of God II should be a crushing disappointment, but its lack of quality’s so predictable that it almost seems inevitable from before you’ve hit play. At 12 tracks in length, it avoids the usual hip-hop album problem of being too bloated, but aside from the token nod to the trap with French Montana, Juicy J and Meek Mill shoehorned into the album’s fourth and fifth tracks (‘Body Rock’ guilty of some typically Lex Luger-aping production to match), it’s hard to think of a more unadventurous, obvious roll call of guest verses. From Diddy, Kanye, Jeezy, Tyler, 50 Cent, Pharrell, Rick Ross and Pusha’s Re-Up Gang comrade Ab-Liva, only Ross, 50 and Tyler seem to step out of second gear. Tyler in particular nails the album’s lead single ‘Trouble on my Mind’, but his presence just emphasises how much the beat, plodding and full of Ominous-with-a-capital-O synths, sounds like a second rate version of something from his own recent album Goblin. Pharrell, in comparison, delivers one of his lamest ever hooks on ‘Raid’.

As for Pusha, he’s still got one of the best voices in rap, but something’s missing. Even when rapping over instrumentals of chart hits on the We Got It for Cheap mixtapes, we’re used to Pusha sounding unstoppable, a total fucking animal, let alone when riding the Neptunes’ sub-zero masterpieces of hip-hop minimalism. It’s rare that he sounds bad on this album, but ignoring its contemplative closer ‘Alone in Vegas’, it’s rare that he comes close to his past highs (no pun intended), and for someone who practically turned cocaine metaphors into an art form, lines like “searching for the fishscale like I’m tryn’a find Nemo” are just a letdown.

Occasionally Pusha still shows his ability to turn your blood cold on Fear of God II (“you know what fame is? Sitting with the woman of your dreams and forgetting what her name is / You know what pain is? Flushing two bricks and tryn’a have a nigga strain it out the drainage”), but these moments are few and far between. Overall it’s a clinical, consistently unexceptional album – in both production and rapping – from a traditionally exceptional artist who shouldn’t be content to release something so average.