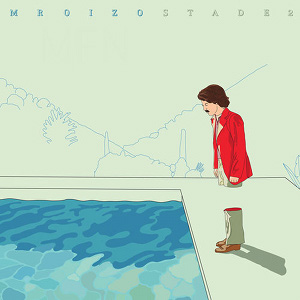 Let’s face it, everything associated with Ed Banger seems pretty hideous at this point, but somehow Mr. Oizo gets away with it, having managed to find the perfect balance between music that sends face-painted 17 year old first-timers mad, but also finds respect amongst Serious Fans Of Real Electro Like Drexciya.

How he does it is anyone’s guess. Stade2, Oizo’s latest album, is electro in the same vein as his last few albums – which is to say it sounds like it just woke up from being passed out in a comedy-sized pile of coke, confrontational at best and obnoxious at worst. And also like his last few albums, it often sounds great. Granted, there’s a few rough moments, it’s tough to sit through an entire three minutes of that classic Oizo narration voice saying “song for the douches” on ‘Douche Beat’ (you’d certainly be trying to mix out of it pretty quick at a club), and there’s a couple of interludes that (probably deliberately) grate, but that’s always the case with Oizo’s records – he’s not here to make it easy.

On ‘SKA’, he proves that he’s still one of the best at breakneck sampling and rhythmic switch-ups, while ‘Cheeree’ takes his classic ‘Positif’ and recasts it even nastier and grainier than before. ‘Oral Sax’ sounds like taking a Justice demo and running it through a shredder, while the writhing ‘France7’ and the stadium-sized ‘Druide’ also provide highlights. It’s nothing Oizo hasn’t done before – you wouldn’t advise someone new to his, ahem, charms to start here, and long-term fans certainly won’t be surprised by it – but as El-P recently said, fuck you never goes out of fashion, and it’s assuring to see that Oizo’s still pushing the same obnoxious agenda with no desire to change with the times.