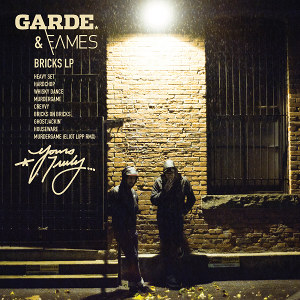 If there’s been any overarching theme in 2011’s underground dance music, it’s been house, house, and more house. It’s certainly nothing new, but producers who once specialized in dubstep or related styles have been openly embracing the four-to-the-floor thump in both DJ sets and their own productions. It’s not just a UK thing: house has even been making a (re)entry into a North American marketplace ruthlessly dominated by dubstep in all its forms. One of the driving forces in Vancouver’s rekindling love affair with house has been the dynamic duo of Prison Garde (formerly Sixtoo of Ninja Tune fame) and Eames. Both former residents of Montreal, the two found themselves recently relocating to Vancouver and striking up an endlessly rewarding partnership, including tracks that ended up on the free Prison Garde album Systeme Hermes earlier this year.

Well as if one free album in 2011 wasn’t enough, the two have spent the better part of the year jamming on synths and cutting down the fruits of their labour into a lean, cohesive LP in the form of Bricks. While tempos vary from 105-135, Bricks is the tight, focused counterpart to Systeme’s glorious sprawl, reflecting the duo’s almost ascetic reliance on their equipment and little else. Edited down from live jamming rather than quantized Ableton neuroses, the songs on Bricks have a refreshing looseness nevertheless offset by the barebones palette they use. Drum machines, synths and pads, Bricks is polemical hardware house, pure dance music with a near-militant agency behind it: the call to, well, dance.

When I interviewed the duo earlier this year, they complained about the state of club music, bemoaning the presence and apparent necessity of vocal hooks to rope dancers in; or, as Eames more succinctly put it, “everything has a fucking vocal!” And you won’t hear any chipmunk divas or mangled gasps on Bricks. Aside from a suitably ghostly “ooh” in the background of percolating slow jam ‘Murdergame’, there’s not a human sound to be found anywhere: the duo instead let the synthesizers do the talking, and the arid landscape is a refreshing throwback to all sorts of referents, from the most mechanical experiments of Chicago deep house to the warmer regions of ’90s techno and electro. Lest the idea of “hardware house” bring to mind the monochrome menace of producers like Boddika or Objekt – who can be aggressively dehumanizing even attheir most uplifting – the duo aren’t afraid to engage with more obvious material. The amazingly-titled ‘Whiskey Dance’ pivots on its straight-face beat with subtle but blinding lashings of colour, and standout ‘Hardchop’ is a pure rave-up with arpeggios that burn white-hot like incandescent filaments.

I’ve called Garde & Eames’ material “unfiltered, unleaded, unpretentious dance music,” and I still can’t think of a better way to describe it. There’s rarely any big drops or crescendoes: this is dance music that lives and breathes at the warm-blooded fingertips of its creators, so you can feel the tension between man and machine on the slightly off-beat, choked synths of ‘Ghostjackin’, the trembling sputter of opener ‘Heavy Set’, or the drunkenly bobbing drum machines on the downbeat ‘Crevvy’, and they inhale, exhale and throb rather than explode.

There’s been all sorts of house music hybrids floating around this year, some more effective than others, some certainly more pure than others, and Bricks represents one of the most exciting iterations. It shows how truly international this whole underground dance music scene is really becoming: that two dudes tucked away in the West Coast of Canada can make some of the year’s most vital, unique and relevant house music is a really exciting thing to be able to say. So forget the year end deluge of list-making, surface level retrospection and everything else; take a listen to Bricks and just get swept up in the groove. One of the brightest production talents in an already overcrowded local scene, Prison Garde & Eames are also some of Vancouver’s mostlively and open-minded DJs, but Bricks is their essence distilled. It’s potent stuff, and hey, it’s free.