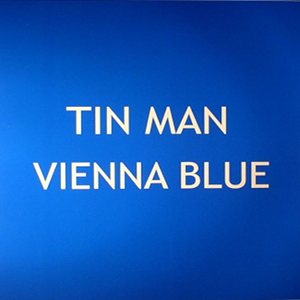 Available on: Global A LP

I’d love to love Tin Man. He’s so damned dapper, and his records are as handsomely and elegantly dressed as the man himself: just look at the crisp hue he’s chosen for the sleeve of Vienna Blue, and then look at a picture of him, dressed in rollneck and sharp blazer. The two images are basically interchangeable.

Johannes Auvinen – for that is his real name – also says things I like. Last year he told Resident Advisor that “the ambition of Tin Man is to become more human, to find a heart.” He’s a romantic. He’s searching. Two tendencies both pitifully rare in contemporary electronic music.

But for all his stylishness, and all his romanticism, I can’t love Tin Man. I’ve tried and I tried but it’s just not happening. Every time a record of his comes out, I feel a quiver of excitement, and think: “This is going to be the Tin Man record that wins me over! And not only am I going to love it, it’s also going to unlock the secrets of his other records and make me love them too!”. Sure enough, when I first learned of Vienna Blue‘s existence, I really thought it was going to be The One.

Well, it’s not. Which isn’t to say I’ve not been enjoying it, or that you won’t enjoy it yourself. Certainly it’s the Tin Man record I’ve felt the closest connection to. If, as the man says, this project is about becoming more human, then this is his most human offering yet. 303 squelch is out and organic chamber instrumentation – specifically cello, violin, clarinet, recorded by Patrick Pulsinger in, yes, Vienna – is in. These instruments are used lyrically, traditionally even, within a more unusual electronic sound design; their natural warmth and gravitas is firmly exploited, manipulation kept to a minimum.

Right down to its title, Vienna Blue seeks to evoke an atmosphere of Continental bohemia, and it largely succeeds: to listen to this album is to be transported to the corner of a gloomy cafe, filterless fag in one hand and espresso in the other, contemplating your extra-marital affair with a suicidal literature student and the pointlessness of life. Alas, at 21 tracks, it’s far, far too long – especially given how many of those are forgettable. If he’d honed it down to 10 or 11 pieces, we might have been dealing with one of the albums of the year; really. As it is, Vienna Blue succeeds in conjuring not just the glamour of coffee bar existentialism, but also the tedium.

It doesn’t start particularly promisingly: the plonking, Radiophonic-style electronics of opener ‘Break Point Logic’ interlock only superficially with the stately, tip-toing string motifs, the whole sounding forced and wooden. Things don’t really get going til ‘Fake Or Make’, the first track on the album to feature both a steady 4/4 thump and Auvinen’s vocals, which sound here like those of a less smoke-damaged Kurt Wagner. The Tin Man croon reappears several times over the course of the album, but with ever diminishing returns; it increasingly distracts from the mood rather than enhancing it, no thanks to lyrics that often feel under-developed and platitudinous.

As such, it’s the instrumentals which ultimately have the most impact: ‘Manifest Destiny’, ‘OK, Improvise’ and ‘Nervy System’ feel like cues for a particularly classy Cold War thriller, ‘Urban Animals’ like a library cue that might’ve featured on an East German kids’ cartoon broadcast from behind the wall. Beautiful music, it must be said. I’m still waiting for the Tin Album that will bowl me over and convince me of his importance, but Vienna Blue is a loafered step in the right direction.