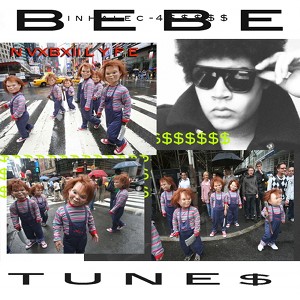 When James Ferraro released Condo Pets and Far Side Virtual this October and November, it represented the first solo records that the ex-Skater, and one of the US underground’s most talked about and eagerly theorised figures, had released in 2011 (excluding a January VHS release, limited to 100 copies). For anyone else, this wouldn’t come as a surprise – for somebody as relentlessly productive as Ferraro, it represented a milestone; a show of restraint and focus that led to his most rewarding explorations of middle America’s wipe-clean underbelly to date.

Of course, musicians always fall straight off the wagon the first time they try, and Ferraro’s no different. Arriving just a month after the release of Far Side Virtual, Bebetunes is Ferraro’s new project, and it’s genuine new ground for him, tackling one of modern America’s greatest capitalist contradictions in modern hip-hop. And when I say tackling, you might as well read parodying.

Yes, the only thing missing from Inhale C-4 $$$$$ is a Photoshopped sleeve of Ferraro sitting on a throne with a sceptre in one hand and a gold-coated pitbull in the other, because past the cover art, it basically takes every currently overused hip-hop trope and relentlessly mocks it. The percussion is almost entirely made from trap rap hi-hats, snares and kick drums, there’s preset trance synths, a “Bebetunes” production tag that sounds exactly like AraabMUZIK’s, and rapper “Yung Cea$er” (presumably Ferraro, or one of his mates), popping up on ‘Li$$tening with my Eyezzz’ to mumble some barely distinguishable lyrics about “the club”. Then there’s the frequent shouts of “swag”, and ‘Nero Cea$er/Anti Christ’, a track that rips Drake and The Weekend in both its self-loathing, reverb-drowned murmurs, and its two part title. Oh, and the mixdowns are sometimes non-existent – surely a reference to the lack of quality control on most rap mixtapes.

Obviously there’s truth to all of this – as hip-hop has become more driven by YouTube channels and free mixtapes than ever before, there’s a lack of filter that’s come as a byproduct to all that freedom – but if it wasn’t someone as talented as Ferraro pointing the finger, it could easily sound embarrassing. As it is, it’s often pretty entertaining, particularly on tracks like ‘#City Light$$$’, where Ferraro brings the in-flight synths that characterised Far Side Virtual – and with it, some of his own personality – into the mix of trap preset kicks and snares. Bebetunes clearly isn’t here to be taken too seriously, but he’s got a lot more replay value than some of his subject matter.