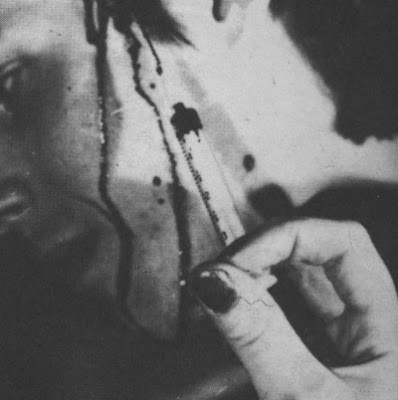 Now I’m Just A Number: Soundtracks 1994-95, to give it its full title, is due to be released in February on London label Blackest Ever Black [full disclosure: run independently by FACT’s Kiran Sande]. The seven tracks featured on the release, which will be available in both limited edition vinyl LP and digital formats, appeared on 1.0, a long out-of-print Black Rain CD album issued by Fifth Colvmn Records in 1995.

Originally conceived as an industrial-influenced death metal group – the first incarnation of the band were noisy enough to support G.G. Allin for his last show in New York – over time Black Rain was whittled down to a two-piece, Argabright and Shinichi Shimokawa, with more of a focus on doomy atmospherics and harsh, future-primitive percussion. The music that they recorded in this vein clearly anticipates, and accords with, the work of present-day Blackest Ever Black artists like Raime, Regis, Vatican Shadow and Young Hunting.

Not for nothing is the new, remastered selection subtitled Soundtracks 1994-1995: some of these tracks were originally composed for a 10th anniversary audiobook edition of William Gibson’s definitive cyberpunk novel Neuromancer, and others were commissioned to score the Keanu Reeves vehicle Johnny Mnemonic (1995). Black Rain’s incredible music was largely excluded from the final cut of that Gibson-scripted, Robert Longo-directed turkey, which we suppose they must be grateful for.

Now I’m Just A Number‘s short opening track, ‘Lo Tek’, has been posted on BEB’s Soundcloud and website; you can stream it above.