Ghost Face Killah: “the spiciest beer in the world” 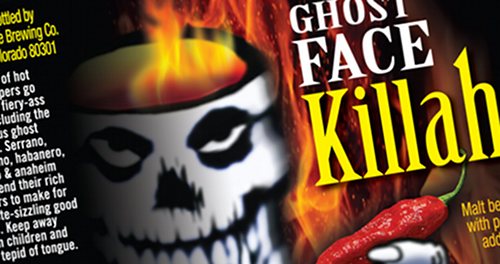 Wu Tang Clan’s Ghostface Killah has been immortalised (well, sort of) as a new brand of American bottled beer.

Originally brewed by Twisted Pine last year, there was apparently one objective in mind when developing Ghost Face Killah: “to make the spiciest beer in the world”.

A press release for the beverage reads as such: “Owner Bob Baile explains how the idea for the beer was born in response to constant requests from fans of the brewery’s standard chili beer, Billy’s Chilies, for something ‘hotter’. “Customers kept asking for more heat and we were determined to oblige them.” The reaction has been overwhelming.

“At its base, Ghost Face Killah is an American-style wheat ale, but it is undeniably different than any other wheat beer out there. Once fermentation is complete, six different strains of chili peppers are introduced: Anaheim, Fresno, jalapeño, serrano, habanero and bhut jolokia, the ‘ghost’ pepper. The result is liquid fire that makes endorphins rush and foreheads sweat. The intense heat presents itself immediately and persists for more than a minute after the sip. Due to the extreme nature of the beer, Ghost Face Killah is sold individually in twelve ounce bottles, as Twisted Pine feels that amount is the perfect dose.

“Since bottling the beer for the first time in May 2011, demand for the capsaicin-loaded beverage has continued to surge. That batch was only available in Colorado, much to the dismay of Twisted Pine’s out-of-state distributors. “We never really planned to mass-produce Ghost Face Killah,” General Manager Jody Valenta points out, “but once we made it, everyone wanted some and the orders just came pouring in.” This time, the brewers made enough for everybody and Ghost Face Killah is slated to appear in early January across Colorado, as well as in Texas, New Mexico, Florida, Nebraska, Missouri and Louisiana”.

Wonder if Adele’s band will make an exception for it. Oh, and the more Wu / beer puns in the comments section the better, please.