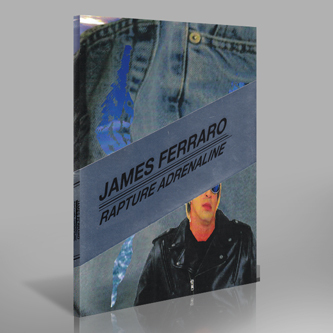 This brain-frying feature was made in 2009 and released on VHS last year by Hundebiss in a limited edition of 150. To give you a better idea of its wacko content, we’ll quote, as we did back then, the more qualified folks at Volcanic Tongue:

“Not sure if this is the full-length movie that James was working on during his Hollywood retreat but it’s based in ‘crime-ridden’ Rochester, New York, in the near future and centres on a police officer who is brutally murdered and subsequently recreated as a super-human cyborg. The main plot of the movie revolves around a ‘Bug’ (code word for a member of an alien species that is similar in many ways to a very large cockroach) searching for a miniature galaxy which is also a vast energy source.

“‘Acid Eagle’ is the president of Hell-TV (Channel 83, Cable 12) a sleazy television station specialising in sensationalistic programming. Displeased with his station’s current lineup (which mostly consists of softcore pornography), Professor Pizza is on a seemingly endless quest for something that isn’t so ‘soft’ and will ‘break through’ to a new audience. The rescue turns out to be fake; the two climbers are taken prisoner by a group of ruthless thieves. The driver is now a hostage trapped by his own seatbelt. However, the robot becomes smarter and more dangerous as it plays putting the boy and his friends in mortal danger. In addition to being an action film, the movie includes larger themes regarding the media, resurrection, gentrification, corruption and human nature.”

Hundebiss add: “[Rapture Adrenaline is a] virtual videogame car chase through the veins of hyperreality seen through fragments of US movies – mostly produced in the 1990s and diffracted by the Euro-lens of Dutch subtitling and French dubbing…”

The new DVD edition, which you can buy here, is limited to 500 copies, and also includes an exclusive piece of interview footage entitled Welcome To Candyland.