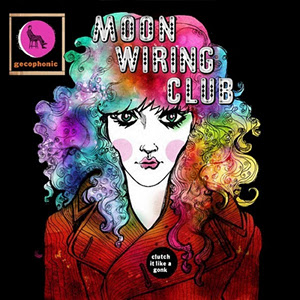 “In 1596, the Elizabethans had a television service of their own.”

Time Machines. When most people release a new album you just get a bunch of tunes but Ian Hodgson, a.k.a Moon Wiring Club is clearly not most people. What you get with Clutch It Like A Gonk is a CD bundle containing 22 tracks of Prime Confusing English Music (© Warren Ellis) and a second 3” CD with another 22 short beatless abstract environments all emanating from the temporally demented parallel Northern village of Clinksell.

MWC originally came to prominence as part of the flowering Hauntology movement way back when, alongside the Ghost Box and Mordant Music labels after artists like Broadcast and Pram had laid the groundwork for a good few years beforehand. In fact all of these artists, excepting the sadly neglected Pram, have been affiliated in one way or another: all have featured on Ghost Box’s Study Series collection of 7”s, and Jon Brooks (a.k.a the magisterial Advisory Circle, amongst other things) has been doing the mastering for MWC from day one. Hodgson though is a truly singular artist with a wonderfully unique sound and vision, building a bizarre Tudorbethan bridge to dancefloor electronics. This is all stitched together with Hodgson’s own wry, sinister and exquisitely detailed artwork and colourful set of characters and mythologies explored on the almost labyrinthine Clinksell tourist board website. Each new transmission carries its own internal logic and has a self-contained jigsaw-like narrative. Quirky this might be, but Moon Wiring Club remains a constant joy due to the loving construction and always astonishing sound of its enticing world.

Built, as always, on the appropriately archaic PS2 software Music, Clutch It Like A Gonk is the sixth Moon Wiring Club album (though some previous long players have landed in different formats with different music but the same title), and unfolds a further refinement in Hodgson’s trademark skewed sound. Mining obscure samples from decades-lost British TV and film, …Gonk shows a greater intricacy and a highly effective command of rhythm, plus less reliance on said samples to fill out the acoustic landscape. Whilst not exactly stark, Hodgson sounds more confident than beforem and if recent long-players by Zomby and Joker have seemed a trifle underwhelming then this is where your head should really be at.

After the opening overture of ‘Tricky Transmissions’, Clutch it like a Gonk kicks in with ‘Elizabethan Automata’ looping on a taut, almost anxious scale; thick synth bass, orchestral stabs and a really nuts melting spoken voice intoning either “how I love you” or “how I loathe you”. Or maybe both, or maybe something altogether different. Suffice it to say it only takes three minutes before things are feeling pretty unhinged. The denizens of Clinksell are seemingly extremely beloved of electricity and talk about it a lot; on ‘Infernal Devices’ they do this over what sounds like Art of Noise debuting in 1873 whilst accidentally slipping through a wormhole that someone has carelessly left open. To appreciate just how sophisticated Hodgson’s productions skills have become, some close and repeated listening is required. On ‘Gonk Operetta’ there are some frankly head-wrecking rewinds and explosions of effects worthy of prime-time 4 Hero – wrinkles in time in full effect.‘Tudorbethan Jobbernowl’ pitches a truly queasy medieval-like fanfare over a rock-solid heavy hip hop break, the whole thing coming over like a militaristic line-dance for ghosts.

…Gonk has its more contemplative moments as well. ‘Dress to Decorate Summer Evenings’ is a woozy outdoor night vigil with an abandoned siren-like loop and a trance like repetition of “she will have materialised”; backwards noise looming eerily on the horizon. ‘That Foggy Feeling’ may be the highlight of the album, pirouetting on a funky Rhodes riff that Gayngs would be proud of, with gaseous gender wordless vocals circling overhead, an occasional ringing telephone and disembodied cries of “hello…” At this point, it should be mentioned that the accompanying 3” CD is wholly in this more contemplative vein, reaching foggy depths of spectral ambient density that point the way for a possible future direction.

But, what Clutch it Like a Gonk really emphasises is that Hodgson is now one of the UK’s most distinctive and brilliant artists. And with plenty of temporal distance from the first flowerings of Hauntology, we can finally appreciate an entire new genre that Hodgson has both invented and singularly occupies. Put a gonk on it.