The Big Pink: Future This 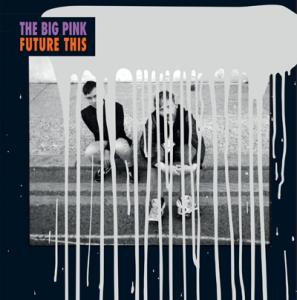 The Big Pink’s Milo Cordell and Robbie Furze pride themselves on being hip, or at least being perceived as such – see last year’s strenuously on-the-pulse Tapes compilation, or their  recent commissioning of a remix by AraabMUZIK. But this hipness doesn’t seem to manifest itself in their own music. Their new album, Future This, is just about the least hip record imaginable, and couldn’t be more inappropriately titled.

Having exhausted their shoegaze aspirations on perfectly competent debut album A Brief History Of Love, the duo’s aim on Future This, as far as I can tell, is to write “big” songs – the kind of soaring anthems that dominated domestic airwaves in the mid-90s, which is presumably when they came of age as fans. If nothing else I salute their daring: after all, fashioning “big”, memorable tunes, tunes intended to become a staple of chain-pubs and indie-disco alike, is always going to be riskier than making, I don’t know, isolationist electronica. The album opens with a double-punch of lead singles, ‘Stay Gold’ and ‘Hit The Ground (Superman)’, both of which are infectious as a mattress in a Victorian brothel. These songs get into your skull, they really do. Problem is, they’re also pretty embarrassing: the vocals are strained, the lyrics platitudinous, the epic chord changes contrived. ‘Stay Gold’ is the more palatable of the two: it’s the kind of song you could imagine an Inbetweeners character listening to his on his iPod the morning after finally getting his end away. That’s a compliment, of sorts. ‘Hit The Ground (Superman)’ looks to ape the songwriting and production pomp of The Flaming Lips and Dave Fridmann ‘s The Soft Bulletin, but inevitably falls short in just about every way.

The strings, Rhodes and horns that open ‘Give It Up’ are presumably meant to summon classic soul records and the kind of hip-hop producers who sample them, but instead they remind me of a particular moment in late Britpop, when conventional guitar groups began clumsily to introduce ill-fitting samples and drum breaks into their songs, in order that they might sound “down with Big Beat”. Nonetheless,  this is a ridiculously good, radio-primed pop single, with a chorus that a Guy Chambers or a Gary Barlow would kill for. What’s more, unlike everything else on the record, the production actually suits the song. If this isn’t soundtracking BBC sports montages and “journey of personal transformation” reality shows by summertime, I’ll eat my hat. It accounts for at least half a star in the rating I’ve given the album.

The album’s middle section treads water – ‘The Palace’ passes by without making any impression whatsoever, ‘1313’ sounds like a more conventional Panda Bear – and then it all goes tits up. The second half of the album is irredeemably dreadful. ‘Rubbernecking’ sounds like a tossed-off single by an X-Factor runner-up (it’s the kind of music I bet Frankie Cocozza wishes he was making, if he’s not already), while the half-arsed motorik of ‘Jump Music’ is an absolute disaster, so awful I can’t even bear to talk about it. ‘Future This’ and  ‘Lose Your Mind’ are a more respectable, but again, those unrelenting gestures towards modernity – buzzing synth-lines, rolling drum loops – have the effect of making things sound wooden and dated. ’77’ is actually a nice conclusion to the album, agreeably spaced-out and charming enough, if of course you’re able to ignore the spoken word passage, and the fact that it all sounds rather like a Human Conditions-era Richard Ashcroft B-side.