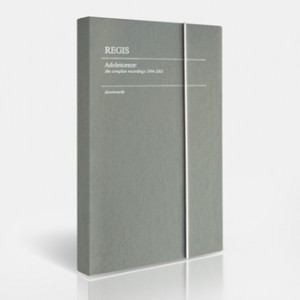 Reviewing and critiquing techno of the mid-to-late ’90s almost doesn’t make sense. Music of this rawest, sometimes most functional form is so deeply an introspective experience that analytical opinions and judgements are questionably meaningless to both the listener and the culture as a whole. In this same sense, reviewing and critiquing Regis also seems a fairly pointless endeavour; his exceptionally single-minded pursuit of such an individual sound defies criticism through outright, admirable apathy. Likewise, if you are a fan, there will probably be an exceptionally strong reason for it – one that a few-hundred-word summary will not accurately compliment or challenge.

However, relative successes and failures there inevitably must be within any long-running project. Compiling material from Gymnastics, ‘We Said No’/’Allies’, ‘Application of Language’, Delivered Into The Hands of Indifference, ‘Facilities‘, Regis, ‘Divine Ritual’, ‘Blood Into Gold’, Penetration and ‘Exercise for Institutions’, Adolescence really is the most complete collection of Karl O’Connor’s works to date. Within it there are of course stronger results than others. To make an attempt at pinpointing these probably relies upon the ability of the music to both create an extremely particular state and sustain it, but also, potentially, stand the test of time.

Split into three CDs, the album starts with productions released in 1994-1996. The strengths of these lie in their ingrained funk, the vast majority containing unapologetically bouncy 909 kicks and toms, tough handclaps, snarling filters and spiky high register synth riffs. ‘Ital’, ‘Surface’, ‘Allies’, ‘Sand’, ‘Cold Water’ and ‘He/2’ are monstrous examples of these elements aligning to create stripped-back vehicles for dancing. ‘Point of Entry’ touches upon experimentation that Regis would return to later, the toms’ distortion washing out the stereo image of the track as a swirling wall of rough noise. ‘Keep Planning’ marries this textural element with the angular grooves of the former to make something quite Drexciyan, a fascinating submerged journey through slowly, restlessly filtered synthesizer bites and a gauzy curtain of ride cymbal.

This inventiveness is built upon within the content of CD 2, the middle period of Adolescence‘s retrospective, 1997-1998. ‘Escape From Yourself’ and ‘Indifference’s canopies of granular bell tones are sublimely uncomfortable, while ‘Concentrate’s slowly evolving pads are, conversely, surprisingly warm and embracing. ‘Wound Us’ draws out filtering through its waspish fury and ‘Guiltless’ spins out a high-register DBX-esque buzz through both ultimate harshness and a soft fuzz.

However, during this time Regis also appears to reach a certain plateau, playing with ideas that would develop more consistently later. What lets the overall results down is that they occur over more staid percussion. This is a controversial statement and, of course, will be highly subjective. However, as objectively as possible, while brief, half- and one-bar circles of continually rolling rhythms can obviously capture exhilaration, hypnosis and claustrophobia, it can also be stale when paired with more evolved material. While the textures are subversive and individual, the percussion is often much less so.

The third chapter of the collection wisely starts at 1999, and this choice immediately highlights the development of Regis’ textural, long-phrase sound palette and a more patient use of energy. The results are often cinematic, ‘It’s A Man’s World’, ‘Thirst’ and ‘White Stains’ typifying the experience; layers built in turn, insistence rising slowly around the natural harmony of resonant drums, and in waves around slab-like drones with their own internal movement. ‘Execution Ground’, ‘Baptism’ and ‘Purification’ bring back the short-span repetitive style, but use vicious looped samples of high female voices in a foreign tongue that adds a successful organic touch. ‘Get On Your Knees’ gratefully relives the funk of his 1994-1996 period with this newly coveted control of musical elements, and ‘Penetration’ nicely smears these into a messy, lopsided result. The introduction of interludes, always deeply menacing and emotional, is an inspired move to convey over-arching preoccupations.

As a complete package, released on CD no doubt for home listening and collection, Adolescence makes for as iconic an achievement as they come. Wholly independent in every respect and immersed in preoccupation to the point of obsession, Regis’ command of a distinct, particular style within a genre is awe-inspiring. Yet, despite the potentially insular nature of this particular strain of techno and the notorious scene it is a part of, there are some important lessons for all within this collection. Adolescence is therefore also particularly interesting for creating an opportunity to reflect upon Regis’ early music against its own achievements.