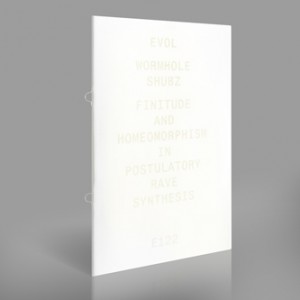 EVOL has always been two parts music academia to one part humour and Wormhole Shubz: Finitude and Homeomorphism In Postulatory Rave Synthesis is certainly no different. Part 12 of Roc Jiménez de Cisneros’ ongoing Punani series, here he presents an impeccable package of academic curiosity about cultural reference, channeled through his unique brand of personal amusement and uncompromising computer music.

Continuing where previous single ‘Rave Slime’ left off, all material on Wormhole Shubz is based entirely on the now legendary Roland Alpha Juno ‘What the?’ synthesizer preset. More colloquially known as the Hoover bass, this is a sound that usefully encapsulates a very specific era and revolution of culture, and probably more than any other of its time. It is this phenomena that has captured EVOL’s attention, causing him to take a relentlessly intense exploration of this most significant of rave signifiers, somehow managing to remain cheeky at the same time as terrifying the living shit out of us.

Those unfamiliar with EVOL’s previous output should know that this is hardcore electronic music, with all the aesthetic extremes that can entail. While often using processes that share similarities with Florian Hecker, EVOL tends to work monophonically, creating long, writhing strings of sound quite unlike anyone else. Constant variation of gesture from a single voice or layered voices moving similarly are the preferred means of retaining interest, meaning that sometimes the most rewarding points actually come from the breaks between phrases, drawing attention to the journey your ear has just taken. Where monophonic sound is unbroken, however, it is frequency phasing that provides a counterpoint in Wormhole Shubz.

While no doubt exhausting for some, this approach totally subverts the familiar experience of the Hoover as a percussive stab and draws it out into total plasticity. Stressing and shaping the preset wildly, EVOL gives it a distinctly personal character, both thrashing madly and wandering lost at the same time, like a trapped bumble bee.

Track 3 does break this pattern, taking a step sideways into territory more akin to Ligeti, or Xenakis and Hecker & Haswell’s UPIC works. Here the Hoover is stretched into immensely long glissandi, slowly ascending and descending ‘sheets’ of phasing, whining frequencies. Yet it is Track 5 that has probably the strongest outcome, due to its successful balance of short gestural bursts, swooping, lashing phrases constantly interrupted, but everything radically, violently filtered, almost as another voice swallowing these entirely.

Special mention must also be made that this album arrives deliciously packaged by loving host label Entr’acte. The CD is housed on the inside cover fold of an eight-page booklet, whose off-white-on-white printed title, on closer inspection, turns out to be glow-in-the-dark ink. The pages therein contain the transcript of an illuminating and amusing interview about presets and sound design with ‘What the?’ creator Eric Persing. Even the extruded staples holding it all together are bloody beautiful.