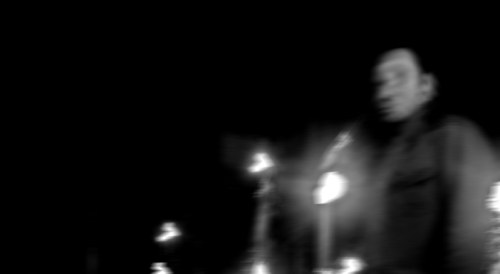 This is a mash-up of a relatively well known-song by a once rather popular band, but don’t go racing forward to the next page in panic just yet. You could hardly be blamed for thinking that this is the last thing the world needs right now, but Transformativa is conducting a truly mesmerising wild and chaotic symphony of sound that reaches some dark depths of barely-in-control intensity at various points of this ‘remix’, especially around the two minute mark when a quite menacing swirl of vocals appear. What is equally admirable is the lack of irony and gimmick – despite brief moments of clarity when the original leaks through the storm, Transformativa seems to be chasing an almost brooding atmosphere rather than a hacked-up dancefloor play of deconstructing familiarity (not that there’s anything necessarily wrong with that, of course). The brief appearance and subsequent disappearance of a cogent beat towards the climax seems to emphasise this separation from club space.

What more can I tell you? Well, not much. This is the debut of a London-based Brazilian-born producer/ musician, the press release quotes Marx, tellingly, “All that is solid melts into air” and that this is the first in a series of three transformations, the next being… Florence and the Machine?! So on the basis of this outing, that is more than intriguing.