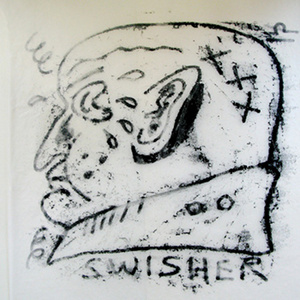 The last two years has seen juke and footwork shift gears from a cult, localised dance music to something more globally recognised, with Planet Mu’s genre compilations and artist albums for the likes of DJ Diamond and DJ Nate leading the charge. Just as interesting though, are artists outside Chicago bending juke and footwork’s 160bpm drum-driven dance template into new forms. And those forms are getting weirder.

Enter Lil Jabba. I don’t know anything about Lil Jabba, bar the fact that he’s originally from Australia, and now lives in Baltimore. Swisher is a six track mini-album, available to buy via Bandcamp, and by God it’s good. When you think of lo-fi footwork, you usually think of DJ Nate’s twisted hyperspeed r’n’b, often accompanied by unintentional compression via YouTube, but Jabba’s stuff is far more sonically interesting and, well, sonically pleasant. It’s still hard – ‘Chaos Charge’ lives up to its name with elephantine horns and snapping snares, and ‘Get Up Bitch’ says exactly what you’d expect from its title – but ‘Maven’ is pure honey for the ears, with a marble bassline that recalls Actress, and twisted jazz licks akin to Madlib.

‘Bruiser’ takes things deep underwater with shimmering highs and a gently bobbing bassline, and is the case with several of Swisher’s tracks, although it’s driven by typical footwork percussion – 808 hi-hats and heavily reverberated claps – the drums never dominate, and sometimes they completely disappear into the middle distance. Jabba’s strength lies in his melodies and the way he flips samples, and he knows that sometimes drums can get in the way of that. Even on ‘Skala’, which rides a pretty straight drum grid, the percussion’s quiet; the emphasis on the track’s seaside ambience.

Swisher isn’t perfect; even after one listen, a noticeable gap in quality emerges between its best moments (‘Maven’, ‘Skala’, ‘Raiders’) and its more average ones (‘Get Up Bitch’), but for a a debut record – it’s actually been on Jabba’s Bandcamp page since June 2011 – it shows serious amounts of promise. Most importantly, Jabba already sounds completely unique: unlike other recent footwork appropriators like Machinedrum, Philip D. Kick and Evian Christ (not a slight at any of those artists, I should add), it’s hard to tell where he’s taking his cues from; where the fuck he’s actually coming from. And that makes his music all the more absorbing.