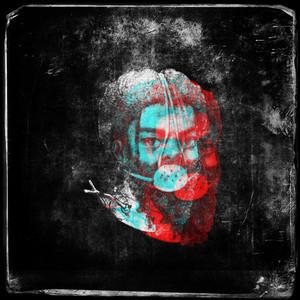 Georges Bataille, a man who knew a thing or two about internal conflict, once hit a point of verbal epiphany, realising that “I MYSELF AM WAR”. Sumach Ecks, a.k.a. Gonjasufi, has done a better job than most in recent years in exploring this lyrically. His 2010 debut album for Warp after a decade of music-making, A Killer and a Sufi, contained a variety of conflicting personalities glued together with Ecks’ paradoxically versatile beaten-down croak of a voice and a heady psych-rock brew co-produced by the then largely unknown Gaslamp Killer. One of the highlights of that year, Gonjasufi then dropped a free EP titled The Ninth Inning, which tomb-raided self-produced older material to tide anxious ears over until the arrival of this new 25 minute mini-album, MU.ZZ.LE.

This, then, is the follow-up to Killer in everything other than length, and inspiration isn’t always too kind on second albums when your debut is so very unique – charismatic personalities throw so much of their lives behind that first outing that they can be left with little else to say, especially if critical and commercial success – and subsequent pressure – rides closely behind. Reading beforehand that MU.ZZ.LE was written on the road as a “response to all the adrenaline, aggression and anger he felt traveling the world” is the last thing I wanted to see: the classic second album lyrical response.

However, as ‘White Picket Fence’ creeps up in horrifically foggy fashion, the gradual rolling of ghostly electric piano, a reverb-saturated slow break and a lonely fucking moan of a voice imploring something too FX-laden to truly distinguish, all doubts turn to Mojave Desert dust, the isolated retreat where Ecks makes his home and produces his music.

The actual sound of MU.ZZ.LE, production duties now split between Gonjasufi and Psychopop, is its most coherent aspect: a reverb-drenched, decayed mournful hazy collage of 60’s organ, Rhodes, pebbles-era guitar and breakbeat and that incredibly expressive voice. As those familiar with his work will already know, despite the precarious balance of the killer and the Sufi inside, Ecks’ emotional range is tightly restrained within the groove – moments may feel extremely angry but they are delivered with subtlety. There’s no separation between tracks creating constant disorientation and surprise, and, given the brevity of the tracks, emphasising its patchwork nature. So the wasted lo-fi psych of ‘Feedin’ Birds’ topples into ‘Nikels and Dimes’ on a heavy drum stutter which then plunges into the rock gospel doom-wop of ‘Rubberband’. The aforementioned ‘Nikels and Dimes’ is an early highlight, upping the pace with a tougher shuffling breakbeat, children’s laughter, preacher’s organ, Joe Meek cosmic-trash keyboard and megaphone self-duet concoction of Christianity, poverty and charity: “Give to the blind / Nikels and Dimes / While they sit in line / Waiting for their chips and wine / Your breadcrumbs my friend / Can feed them again”. The queasy, wonky coda sounds like some reanimated turnntablist version of The Band circa their second album.

Gonjasufi is like some kind of hip-hop Ethan Edwards, John Wayne’s eternally lost desert wanderer in John Ford’s The Searchers. Surrounded by death and moral dislocation, Edwards’s fate is doomed from the start, his moral compass broken beyond repair, his actions and reactions guided by an obsessive rage and sense of justice that has demonised him and drained him of humanity. Ecks is more of a fighter, holding on to a vision of life, releasing records because he absolutely has to, with next to no career consideration whatsoever. Which, let’s face it, is something of a rarity.

For such a short album though, MU.ZZ.LE can meander messily, especially across ‘Venom’ and ‘Timeout’ which seem more like sketches or fleeting repetitive apparitions than fully fleshed-out songs. But, when Gonjasufi really does hit the mark it puts me in mind of a kind of post-rehab New Kingdom (a truly great lost hip-hop outfit from the 90’s), a nouveau nomad hip-hop psychedelia, and nowhere is this better exemplified than on the ‘The Blame’. Pitched on a quiet electro-tinged snare, 60’s garage rhythm guitar and an organ whirl that’s pure Saucerful of Secrets, Ecks testifies with his least distorted delivery: “Children fucking blow up malls / Grown men fucking blow-up dolls / I’m not the perfect man / And I never claimed to be / I’ve done some things in my time / And even I’m ashamed of me”. MU.ZZ.LE isn’t the perfect album either, but it is another bizarre step in the unfolding vision of a very unique voice, a tantalizing and far too brief hint at something magnificent to come.