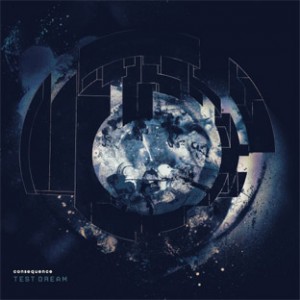 Consequence’s Test Dream is quietly fraught, emotional but appropriately tired, exploring, it appears, an abstracted sci-fi aesthetic. There is a touch of something of a recent past about it; the late ’90s/early ’00s electronic music of an introverted nature, material that didn’t attempt to be too clever.  The overall ambience and palette of techniques used could potentially have stepped out of the mid-catalogue of a label like Skam or Leaf. There is also a lot of Kosmiche influence underpinning the album, with plenty of thick synth brass and soundscapes.

The mixture of these two styles results in something undeniably individual, albeit with general aural traits that pop up and detract from the results. There are moments in some where the focus drifts, or where certain sounds occur that are a bit too close to technological clichés of both eras. ‘Just Water’ conveniently summarises this, its zaps, bleeps and dischords sounding more like homage to radio-theatre and hard to take seriously. In tracks that are more successful overall, it is similar elements that stick out oddly.

Where applied well, however, this style works to create genuine drama, such as the filtered fanfares of ‘Before I Go’ and ‘Re-occurring’. The rawer textural elements found throughout the album also provide some engaging layers and gestures when not sounding too obvious or Burial-esque, such as the waves of murky rumblings crossing rhythms in the brooding ‘Magda Trench’.

Test Dream’s strengths, however, mainly tend to lie in the less familiar, all of which are handled gracefully. Skeletal DnB number ‘Untitled Dream’ uses plucking rhythms reminiscent of Gagaku in its occasional melodic line that help compliment the rigid frame of its pulse. ‘Slant’ continues the interplanetary synth and spoken word dubstep of Kode9’s Black Sun which, while now familiar, is executed well. Opener ‘Can’t Say’ is propelled by rhythms that clip and distort, tripping and tumbling with a quiet insistence, and ‘Lovershell’ has a wonderfully disconnected melody paired with an equally disconnected beat, a lovely awkward simplicity comparable to Quinoline Yellow.

While being made largely of material with retro qualities (possibly intentionally, possibly not) that make it less convincing overall, Consequence has created an album that flows well and possesses character, contributing food for thought about new directions that drum’n’bass can move in.