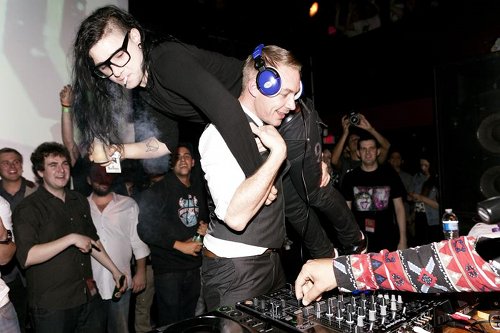 “These two are my best friends”, says Diplo.

Skrillex, Diplo and A-Trak recently graced the cover of Billboard magazine, which anointed them ‘ready for mainstream global domination’. If Diplo’s comments are anything to go by, they might well be doing so as a triumvirate:

“We have such different sounds but it’s not unusual for us to play each other’s records…it’s not even a weird idea for us to collaborate with each other … There will definitely be something from the three of us soon.” [via Billboard]

All three have been involved in high-profile collaborations in the past. A-Trak works with Armand Van Helden as Duck Sauce; Diplo’s list of co-conspirators ranges from Switch to Nicola Roberts; and Skrillex isn’t averse to unexpected musical hook-ups, as his recent collaboration with The Doors demonstrated. Moreover, Diplo and Skrillex have certainly been through thick and thin together: both were passengers on the ill-fated Holy Ship, the “rave cruise” which ran aground off the Bahamas earlier this year.